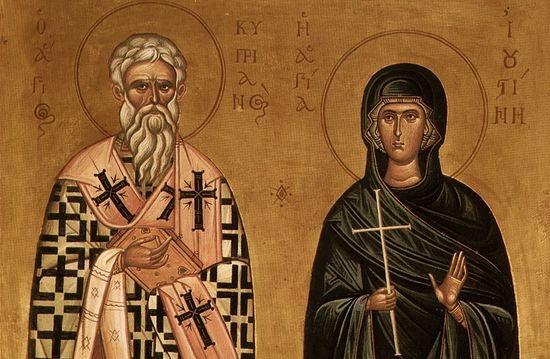 Justina the virgin was of the city of Antioch, daughter of a priest of the idols. She was converted after hearing the Gospels preached by a holy priest. She expressed her decision to change her life to her mother and father, who were gravely concerned.
.
That night, Christ appeared to them with His Angels, saying: “Come to me, I shall give to you the kingdom of Heaven.” And when they awoke, they asked to be baptized with their daughter.
.
The magician Cyprian became enamored with St. Justina’s beauty
.
Cyprian was a wizard since childhood. At age seven he was consecrated by his parents to the Devil. He became a master at the craft of necromancy and was famed for his occult powers.
.
Then, Cyprian was covetous of the love of Justina and burned in concupiscence for her. Resorting to his magic that he might have her for himself, he called a Devil to him.
.
“Why have you called me?” the Devil inquired.
.
Cyprian said: “I love a virgin. Can you not help me to have my pleasure of her?”
M
The Devil proudly replied. “I – who cast man out of Paradise, and procured Cain to slay his brother, and made the Jews slay Christ, and have never ceased troubling men – do you not know that I can easily do what you ask? Take this ointment and anoint her house with it, and I shall come and kindle her heart with love for you.”
.
The next night the Devil went there to move her heart with unlawful love. But, when she felt it, she recommended herself devoutly to God and made the Sign of the Cross.
.
The Devil, fearful of that Sign, fled from her. Then, he went to Cyprian and stood before him. Cyprian asked: “Why have you not brought this virgin to me?
.
The Devil replied: “I see in her a Sign that frightened me and caused all strength in me to fail.”
.
Then, Cyprian called another even stronger Devil, who assured him he could do what the other could not.
.
So, this Devil went to Justina to move her heart to dishonest things. Again, recommending herself to God, she made the Sign of the Cross, she blew on the Devil and threw him forcibly away from her. He also fled in confusion and came before Cyprian.
.
Again Cyprian asked: “Where is the maid whom I sent you to bring to me?”
.
The Devil replied: “I acknowledge that I am overcome and rebutted, for I saw in her a horrible Sign and thus lost all my power.”
.
Then, Cyprian called the Prince of the Devils. “How can it be that your strength is so little that it is overcome by a maid?” he asked. Satan said: “I shall go and inflame her heart and body with so ardent desire of you that she shall be frantic. Thus, I shall bring her to you at midnight.”
.
The Devil tries to seduce St. Justina in various ways
.
The Devil transfigured himself into the likeness of a maid and came to this holy virgin, saying: “I have come to you to live with you in chastity, and I ask you to tell me the reward we will have for doing so.”
.
Justina answered, “The reward is great, and the labor is small.”
.
Then, the Devil said to her: “Why then did God command us, ‘Grow and multiply and replenish the earth?’ And so, fair sister, I fear that if we abide in virginity we shall make the word of God vain. Despising and disobeying His word in this way, we shall fall into a grievous judgment where we shall have no hope of reward, but shall suffer in great torment and pain.”
.
Thus, by the Devil’s enticement, Justina was smitten with evil thoughts and was greatly inflamed in desire of the sin of the flesh. But, then the virgin came to herself and realized who was speaking to her. Again, she blessed herself with the Sign of the Cross, and blew on the Devil, and he vanished away and melted like wax. Thus, she was delivered from all temptation.
.
A little while after, the Devil transfigured himself into the likeness of a fair young man and entered her chamber. Finding her alone in her bed, he shamelessly sprang into her bed and embraced her. But, she knew well that it was a wicked spirit, and blessing herself as she had done before, that powerful Devil melted away like wax.

After that, with the allowance of God, the Devil caused Justina to be vexed with blisters and fevers. And the Devil slew many men and beasts, and threatened that a great plague would fall on Antioch unless Justina would consent to wedlock and have Cyprian. And all who were sick and languishing in maladies lay at the gate of Justina’s father, crying out for her to marry and deliver the city from that great peril. When Justina still would not consent, they made threats against her. Finally, in the sixth year of that plague, her prayers were heard, driving away all that pestilence.
.
Then, when the Devil saw that he had profited nothing from his efforts, he transfigured himself into the form of Justina in order to defoul her honor. Thus, he went to Cyprian pretending that he had brought him Justina. When Cyprian saw him and supposed that he was the desired virgin, he was joyous and said: “You are welcome, Justina, the fairest of all women.”
.
But, as soon as Cyrian pronounced the name Justina, the Devil could not endure it and disappeared in a cloud of smoke.
.
The Devil admits the greater power of Christ
.
Then the Devil, being vanquished in all things, returned to Cyprian, and admitted his confusion. Cyprian asked: “How is your power so weak that it cannot overcome a maid, but she overcomes and breaks you to pieces? Tell me, I command you, in whom does she have all this great might and strength?”
.
The torments of Hell await those who the Devil deceives
.
The Devil answered: “If you will swear to me that you will not depart from me or forsake me, I shall show you her strength and her victory.”
.
“By what oath shall I swear?” asked Cyprian.
.
And the Devil said: “Swear by my great powers that you shall never depart from me.”
.
And Cyprian swore so.
.
The Devil told him: “This maid makes the Sign of the Cross, and thus we become feeble and lose all our might and power, and flee from her, like as wax flees from the face of the fire.”
.
“The crucified God is then greater than you?” Cyprian asked.
.
The Devil was forced to admit: “Yes, certainly he is greater than all others, and all whom we deceive here, He judges them to be tormented with inextinguishable fire.”
.
Cyprian said: “Then should I not be made friend of Him who was crucified, lest I fall hereafter into such pains?”
.
But the Devil, furious, replied: “You have sworn by the might of my powers what no man may forswear, that you shall never depart from me.”
.
Cyprian replied: “I despise you and forsake you and all your power. I hereby renounce you and all your Devils, and I garnish and mark myself with the Sign of the Cross. Immediately the Devil departed in confusion.
.
Then, Cyprian went to the Bishop. When the Bishop saw him, he feared that the famed magician was there to cause some harm. So he told him: “Be it known to you, Cyprian, that you cannot prevail against the Church of God, for the power of Jesus Christ is joined to it and is not overcome.”
.
But, Cyprian said: “I am certain that the power of Our Lord Jesus Christ is not overcome.”
.
Then, he recounted all that had happened and asked to be baptized. Afterward, he grew much in learning and virtue. And when the Bishop died, Cyprian was consecrated Bishop. He placed the blessed virgin Justina in a convent, and made her Abbess over many virgins. St. Cyprian sent many epistles to martyrs and comforted them in their martyrdom.
.
The martyrdom of Justina & Cyprian
.
Bishop Cyprian and the Virgin Justina were condemned after refusing to sacrifice to the pagan gods
.
The earl of that country heard of the fame and renown of Cyprian and Justina, and ordered them to come before him to make sacrifice to the gods.
.
When he saw that they abode steadfastly in the faith of Jesus Christ, he commanded that they should be put in a cauldron full of boiling wax, pitch and grease. But all this was a marvelous refreshment for them, and caused them no grief or pain.
.
Furious at seeing this, the priest of the idols came before the cauldron to call on their gods to send fire to burn Cyprian and Justina: “Great is the god Hercules, and Jupiter the father of gods.”
.
In response, however, a great fire issued from under the cauldron and consumed the false priest.
.
Then, Cyprian and Justina were taken out of the cauldron and they were both beheaded. Their bodies were thrown to the hounds and were there for seven days, but were untouched. Afterwards they were taken up and transferred to Rome, and now they rest at Placentia. They suffered death in the seventh calends of October [September 26], about the year of our Lord 280, under Diocletian.
.
https://www.traditioninaction.org/religious/h151_Cyprian.htm
.