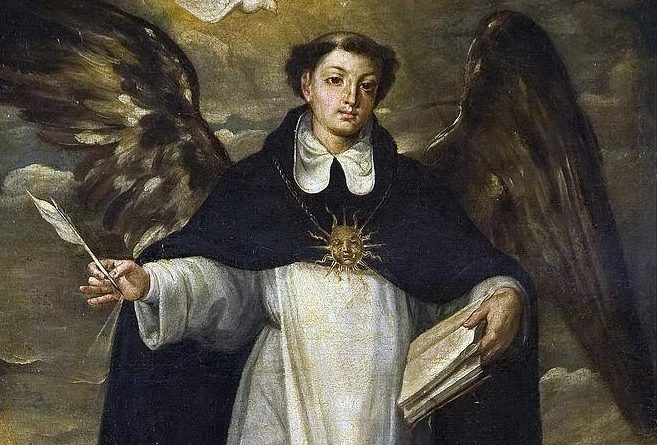 1. Whether Virtue is a Habit?
.
Summary: Yes, virtue is a habit. There are good and bad habits. The bad are called vices and the good are called virtues.
.
What is a habit? – The Philosopher (Aristotle) “defines habit, a ‘disposition whereby someone is disposed, well or ill;’ and he says that by ‘habits we are directed well or ill in reference to the passions.’ For when a the mode is suitable to the thing’s nature, it has the aspect of good: and when it is unsuitable, it has the aspect of evil.” (I-II.49)
.
A Habit or Act? – Virtue “denotes a certain perfection of a power. Now a thing’s perfection is considered chiefly in regard to its end. But the end of power is act. Wherefore power is said to be perfect, according as it is determinate to its act.” Power (potential) finds its end in an act. Virtue perfects the power; thus, the act is perfected. Justice is not an act, but by the habit of justice one may act justly.
.
2. Whether Human Virtue Is an Operative Habit?
.
Power is twofold:
1. Power of Being – in reference to matter, which is potential being
2. Power of Act – in reference to form, the principle of action
.
In regards to humans, the “matter” is the body and the “form” is the soul. The form gives the act to the potency of matter, e.g., wood never exists as a formless blob, but is always in some existence or form, such as a tree or a chair. For humans, the soul gives the act to the potency of the body; hence, once the soul is there it is a new life and once the soul leaves, the body ceases to be alive.
.
Humans differ from plants and animals, because humans have a rational soul. Since humans are distinct for their rational powers, human virtue cannot belong to the body, but must belong to the soul. If human virtue is in reference to the soul (the form of the body, the act), then “human virtue does not imply reference to being, but rather to act
and “consequently it is essential that human virtue to be an operative habit.”
.
Summary: Virtue perfects power (potency). Humans have rational souls with distinctly human powers; thus, human virtue will be a perfection of those powers within the human soul.
.
3. Whether Human Virtue Is a Good Habit?
.
Good & Limit – Each power (potency) finds its perfection in an act, but that means each power must have a limit to define its act. The virtue of a thing is fixed according to the limit of its power. Perfection is then the power acting according to its full limit or potency.
.
Evil & Defect – However, evil implies a defect, a privation, or a lack. Consequently, the perfection of a power to its limit is good. Ergo, virtue, as perfection of the power, is a good habit.
.
Example of Perfection & Privation in Virtue: Justice is a virtue. If one is said to have acted justly, then it is said his act was the perfection of the power. For a power finds its perfection in act according to its limit. However, if one is said to have act unjustly, then the act suffered a lack or came short of the limit or virtue of justice.
.
What is Virtue?
A. Genus: Quality
B. Proximate Genus: Habit (a species of quality)
C. Species: Virtue
.
Virtue is a good, thus it is a Good Habit.
.
4. Whether Virtue is Suitably Defined?
.
A Virtue has:
1. No matter “out of which it is formed”
2. Matter “about which it is concerned” – the object, which fixes the species
3. Matter “in which it exists, namely, the subject.” – the mind, thus virtue is a “good quality of the mind.”
.
What is Infused Virtue? – God is the efficient cause of all infused virtues, thus “God works in us, without us.” Infused virtue “is caused in us by God without any action on our part, but not without our consent. This is the sense of the words, which God works in us without us. As to those things which are done by us, God causes them in us, yet not without action on our part, for He works in every will and in every nature.”
.
Infused Virtue – virtues that are beyond man’s capacity to acquire without God (Theological: Faith, Hope, & Charity)
.
Acquired Virtue – virtues man is capable of acquiring by nature (Natural: Prudence, Justice, Temperance, Fortitude)