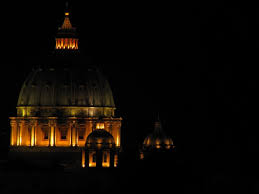 One thought on “Blessed Anne Catherine Emmerich Prophecy of the Two Popes and The Church of Darkness .”