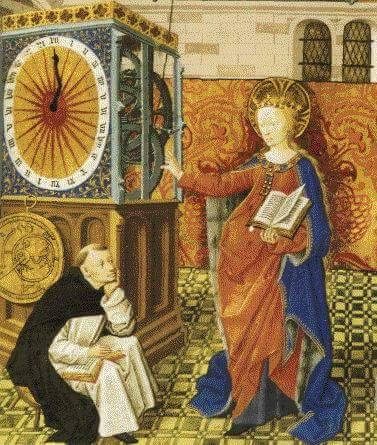 Blessed Henry Suzo was born in 1300 at Constance in Germany. There he entered the Dominican convent at the age of thirteen, and made his preparatory studies in the sacred disciplines. In 1327 he became a teacher of theology, and in 1334 began preaching. In 1343 he was elected prior of a convent at Diessenhofen. Blessed Henry is known especially as a mystic who regarded himself as the servant of Eternal Wisdom become Man. He practiced severe austerities and experienced, along with his visions and ecstasies, bitter persecutions and grievous calumnies.

He assisted in the restoration of strict religious observance in the cloisters, especially in the Dominican convents for women at Katherinentahl and T�ss. One of the Superiors in these convents preserved most of his letters and obtained the history of his life, which he himself later edited and published. As a preacher he was highly esteemed in many Swiss and Dutch cities. It is said that for 150 years there was no book of meditation more widely read in the German language than his Little Book of Eternal Wisdom. Blessed Henry translated this work into Latin as well, and added at that time to its contents.

He died in 1366; 250 years later, in 1613, workers in the old convent at Ulm found his body perfectly conserved and emitting a pleasant fragrance. Unfortunately the non-Catholic authorities of the city had the tomb closed; and the Bollandists, famous hagiographists of 19thcentury France, wrote in 1882 that no trace was any longer known of it. He was declared Blessed in 1831 by Pope Gregory XVI.