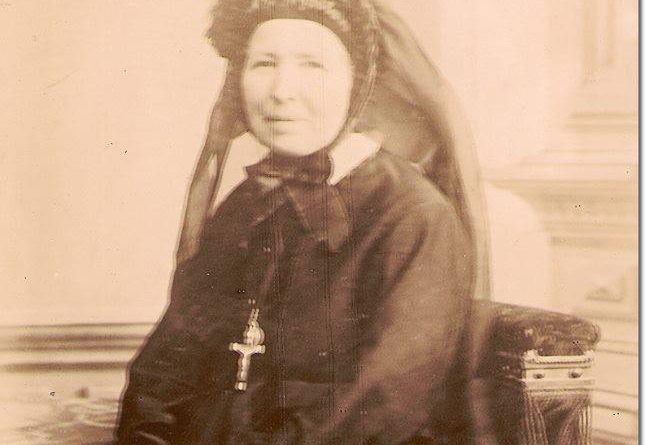 Blessed Melanie Calvat
O.D.M. pinxit
.
Born on November 7, 1831, in Corps, France, Françoise Melanie Calvat was the fourth of ten children born to Pierre Calvat, an honest stonemason and sawyer, and Julie Barnaud, a lightheaded woman who disgracefully mistreated Melanie. Put out of the house at the age of three, the little girl took refuge in the woods, where a beautiful little Child (the Child Jesus) visited her, calling her the sister of My Heart. He consoled and instructed her, and was her only friend throughout her childhood. At the age of three, she was stigmatized and favored with the vision of Our Lady, who promised to watch over her as Mother and Mistress. The occupation of shepherdess was imposed upon her at the tender age of six, and Melanie suffered much affliction with love and patience. 1846 found her, now fourteen years old, watching her master’s cows in La Salette, located a few kilometers from Corps. This is where the Mother of God chose to appear to her and to Maximin Giraud to transmit Her Message. After the Apparition, the two children were placed as boarders in the Sisters of Providence convent in Corps, where an inquiry concerning the Apparition took place.
.
The life of Melanie was not a tranquil one. She entered religion in her native village of Corps at the age of twenty, but was soon exiled from France by her bishop, who arranged for her to be accompanied to Darlington, England by an English prelate. There she was sequestered in a Carmel for several years, until released from its vow of cloister by the Holy Father Pius IX, that she might be free to accomplish her mission. Melanie was able to publish the Secret, as the Virgin had commanded, only in 1872 and 1873, in Italy, with an Imprimatur of Cardinal Sforza, Archbishop of Naples, and with the approbation of Pope Pius IX. When she completed the Secret by adding an account of the Apparition from beginning to end in 1878, Pope Leon XIII, reading her narration, said, This document must be published. Included in it is the urgent appeal of Our Lady, summoning the Apostles of the Latter Times, who will have lived in contempt of the world and themselves, in silence, prayer and mortification, in chastity and union with God, in suffering and unknown to the worldcombat, in these days of woe. The brochure was again printed in 1879, with the Imprimatur of Monsignor Zola, bishop of Lecce near Naples, who had protected and assisted Melanie in his diocese. Her life was one of constant miraculous help from Heaven amid unceasing contradictions; her soul, hidden behind a very modest exterior which only the holy consecrated souls of her time could penetrate, was one of beautiful innocence and of a sanctity far from ordinary.
.
The bishops of France resisted the Secret with, at times, a real fury, because its warnings as to the political ambitions of Napoleon III and the regrettable state of the clergy in general, were not to their liking. Melanie was called insane, she was calumniated, refused possession of a terrain in France willed legally to the Order of the Mother of God which she represented; refused Holy Communion at times; she was exiled from certain dioceses when she returned from Italy for a few years. Eventually, after prolonged efforts to establish the Order of the Mother of God both in Italy and in France, she again went to Italy, where she died in 1904. She had foretold: The spirit of La Salette can be transported. And when the hour has sounded, the Blessed Virgin will be able to resurrect La Salette and accomplish Her Work… The Blessed Virgin’s words are not sterile like those of men… Her Work will be done. Men and devils can do nothing against Her. She will triumph. Men can resist the call of grace and Her appeal, but She can transport Her great light and show it to others. Let us await Her help and Her hour.