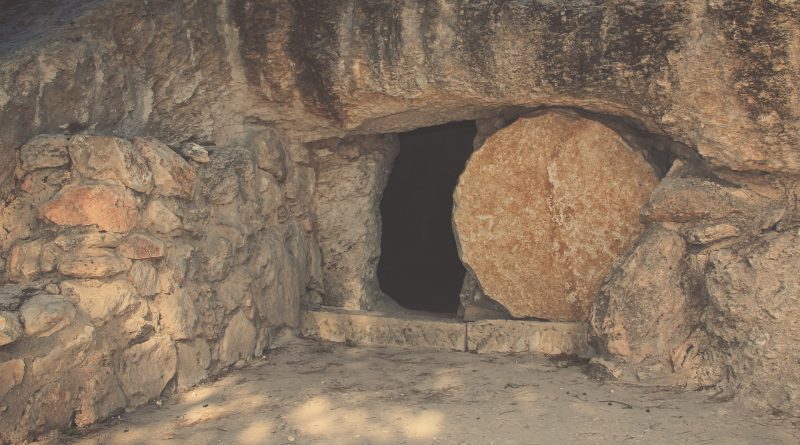 “For you are dead and your life is hid with Christ in God.” Words taken from today’s lesson for the Easter Vigil.

When the Saints speak about the wondrous mystery of the Incarnation, the mystery of the Son of God becoming flesh. They often call it the “annihilation of the Incarnation.” The annihilation of the Incarnation. Divinity and humanity cannot be compared. Omnipotence uniting with fragility and littleness. What an infinite condescension occurred when God became man in Mary’s womb. But then we see a further annihilation in the crucifixion and burial of Christ, the Savior. The burial of Christ in the tomb. Divinity is still united to Christ’s human soul in the Limbo of the Father’s, and divinity is also united to the body and soul in that tomb.

Divinity is united therefore, to a corpse; a corpse with no movement, no speech, and no feeling. And yet their corpse is utterly incorruptible, due to its union with the divine. But this annihilation continues in most Holy Communion. Not only is divinity hidden in the most blessed of all sacraments, but also the humanity of Christ is hidden. Christ remains motionless in the sacred host. He’s carried from tabernacle to the Communion rail to feed the flock. He’s placed in a monstrance, remaining there to be adored in solemn exposition.

It’s like His will is not His own. He’s carried to the sick and the dying. He allows Himself even to be mistreated through profanation and sacrilege in the Most Holy Eucharist. At Holy Communion, the members of the Mystical Body of Christ receive the risen body of Christ complete with His most precious blood, his true human soul, and His divinity.

But in a sense, we bury the body of Christ in our hearts at Holy Communion. We must therefore prepare the tomb, the sepulchre, if you will, of our souls. We must have the perfume of good conscience to anoint Him with as well as the spices of good works and virtues, as His body is placed within us. Allow Him to take His rest in our souls in a tomb even more richly adorned than that of Joseph of Arimathea.

You know, over the last few weeks, we have largely been within our own sepulchres. We’ve been buried, if you will, in our homes. And like the Apostles hiding in the upper room after the arrest and crucifixion of Christ, because, as the Bible said, “they were fearful of the Jews,” we find ourselves hiding from a virus that we cannot even see with the naked eye. But we can learn much from our Lord’s burial in the tomb. We can learn to love the hidden life.
Our Lord loves to hide at times. His hidden life in the womb of Mary and His hidden life in the home of Nazareth. Perhaps we can be a bit more hidden, more simple, less frantic, and a bit less distracted. Perhaps we could enjoy spending more time with our families, eating together regularly, praying in our homes as a family, and recreating together.

But our Lord’s sacred body in the tomb can teach us even more. There was of course, no corruption of Christ’s body due to its unity with the Divinity. And so we should live in that manner with no corruption of mortal sins within us.

And finally, we can learn from the docility of Christ, who willingly accepted His time of internment in the tomb. Let us learn from this time of our own spiritual convalescence. Let us become ever more revived once Spring has come so to live a risen life that has buried the old Adam and is allowed the new Adam to rise up within us.

In conclusion, the prophecy of Isaias clearly teaches us that Christ’s glory would begin in the tomb in the sepulchre. As the great prophet stated, “His sepulchre shall be glorious.” The humiliations of the grave would mark the beginning of His victory. The heavy stone being rolled over the entrance and the guards being assigned to watch over the tomb holding a corpse. All of this proves His resurrection and His total victory. The Son of God is always in control as He will literally raise Himself from the dead.

We, on the other hand, are powerless. And this powerlessness has been manifested to us during this time. If we die with Christ and are buried with Him, we shall rise with Him triumphant and come forth from our own tombs one day to a place where there is no more pain, no more threats, no more fears, and no more suffering and death.

In the name of the Father and the Son of the Holy Ghost, Amen.