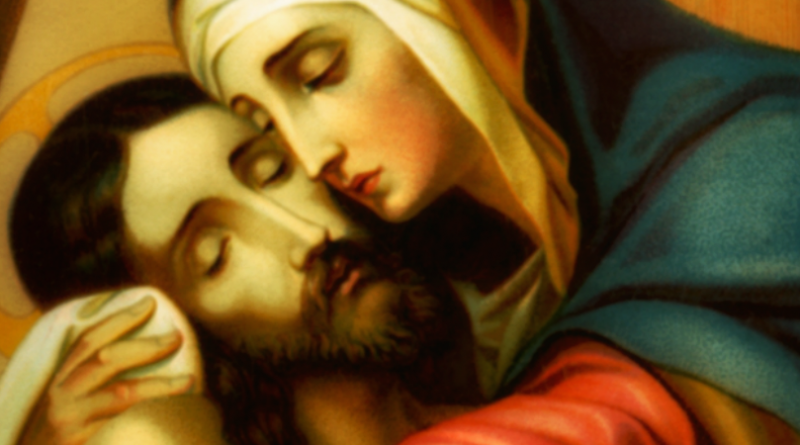 REMEMBER IT ONLY TAKES ONE MORTAL SIN TO SEND SOMEONE TO HELL FOR ALL ETERNITY SO WHAT GREAT MERIT WE ACHIEVE BEFORE OUR LORD JESUS FOR STOPPING SUCH AN INFINITE EVIL ACT FROM HAPPENING TO OUR LORD WHO IS HOLINESS AND GOODNESS ITSELF.
.
With a contrite and a pure and loving heart say:
.
MARY, Immaculate Mother of Jesus, offer, we beseech thee, to the Eternal Father, the Precious Blood of thy Divine Son, to prevent at least one mortal sin from being committed somewhere in the world this day (night).
.
How a Man Who Stopped Two Mortal Sins From Being Committed Eqaled the Merits of a Saint
.
St. Paphnutius had for many years lived in a desert and labored at his sanctification by austere works of penance. Once a peculiar thought came to his mind, and he dared to express it to God in prayer. He petitioned the Lord, in all humility and simplicity, to reveal to him a person who had the same degree of merit as he himself. God deigned to grant his request, and He gave Paphnutius to understand that at this moment a certain flutist living in Egypt ranked equal to him in merit.
.
The Saint at once started on a journey to find the flutist. Having arrived at the appropriate village, and making inquiries there, he was informed that the man he was seeking was engaged at a neighboring tavern, playing for the amusement of those who patronized the place. “How strange!” thought Paphnutius. Nevertheless, he sent word to the musician, begging him for a short interview. When the musician came, the Saint took him aside and spoke to him regarding the condition of his soul. “What good deeds have you ever done?” asked Paphnutius.
.
“Good deeds?” replied the flutist; “I do not remember ever having done any; all I remember is that one day, while I was pursuing my former trade of stealing, I saved the honor of a virgin consecrated to God, and another time I gave my money to a poor woman who, in her great distress, was about to commit a crime.” From this, our Saint realized that God had given the flutist graces similar to those he himself had received, because for the honor of his Creator, this man in his crude life had prevented two mortal sins.
.
If we truly love God, we cannot feel indifferent when God is offended. St. Mary Magdalen de Pazzi, when only eight years old, happened to hear two persons quarreling and using the most insulting language, and undoubtedly they thereby became guilty of mortal sin. The Saint was so pained at the thought of how grievously God had been offended that she spent the entire night weeping. Sixteen years had passed and she had forgotten this occurrence, when God revealed to her that in reward for the tears she had shed for the sins of others, she was destined to a special degree of glory, which was shown her in the form of a brilliant garment.Daily Offering of the Most Precious Blood
.