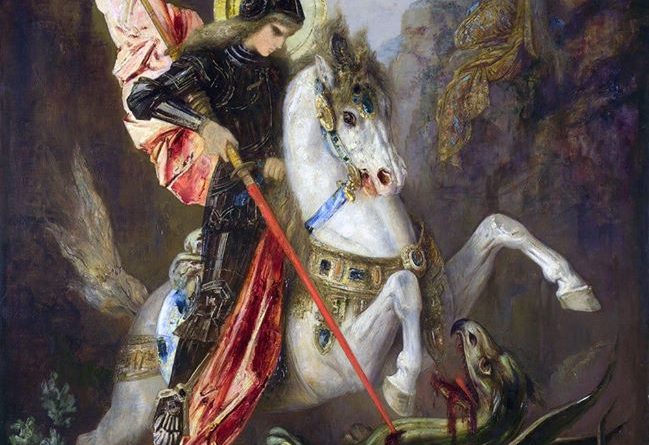 Some people contrive that dragons can both take the human form and turn into serpents, sometimes small, sometimes huge, differing in body length and size, and sometimes, as was already stated above, having turned into people, start to associate with them, appear to steal women and consort with them; so we would ask [those who tell such stories]: how many intelligent natures did God create? And if they do not know the answer, we will respond: two – I mean angels and humans… So He created the two intelligent natures; but if a dragon changes its form while associating with people, becoming at one moment a serpent, at another a man… so it follows with all possible clarity that dragons are intelligent beings exceeding men greatly, which has not [ever] been true, and never will be.
.
Let them also say who in particular tells about it. For we trust the teaching of Moses, and, more exactly, the Holy Spirit, having spoken through [the prophet]. This [teaching] reads: And God brought them unto Adam to see what he would call them; and whatsoever [Adam] called every living creature, that was the name thereof (cf. Gen. 2:19). Hence, a dragon was one of the animals. I am not telling you, after all, that there are no dragons; dragons exist but they are serpents borne of other serpents. Being just born and young, they are small; but when they grow up and get mature, they become big and fat so that exceed the other serpents in length and size. It is said they grow up more than thirty cubits; as for their thickness, they get as thick as a big log. Dio the Roman (A.D. 155 – 236) who wrote the history of Roman empire and republic, reports the following: one day, when Regulus, a Roman consul, was fighting against Carthage, a dragon suddenly crept up and settled behind the wall of the Roman army. The Romans killed it by order of Regulus, excoriated it and sent the hide to the Roman senate. When the dragon’s hide, as Dio says, was measured up by order of the senate, it happened to be, amazing, one hundred and twenty feet long, and the thickness was fitting to the length.”
.
There is one more kind of dragon; those have wide head, goldish eyes and horny protuberances on the back of the head. They also have a beard [protruding] out of the throat; this kind of dragons is called “agaphodemons” and it is said they have no faces. This dragon is a sort of beasts, like the rest of the animals, for it has a beard, like a goat, and horn at the back of its head. Its eyes are big and goldish. These dragons can be both big and small. All serpent kinds are poisonous, except dragons, for they do not emit poison.
.
The tale is also told that dragons can be driven away by thunder; as if a dragon goes up and gets killed. When I heard this I laughed! Is it possible to see a dragon now a human-like and intelligent creature, now a serpent; now a rebel against God, now a being pursued by Him? Ignorance is truly an unreliable thing.
.
We harm ourselves most of all when we ignore reading of the Holy Scriptures and studying them according to the Word of our Lord.
.
St. John Damascene is not the only Church Father to write about dragons (or other mythological creatures).
.
In his Commentary on Job, St. Ephraim the Syrian writes, “The Behemoth is a dragon, that is, a land animal, just as the Leviathan is an aquatic sea animal.”

St. John Chrysostom writes in his Commentary on Job, “If God has created these two enormous beasts, He did so in order that you might know that He may create all of them according to their own type. But God does not do so because creation is oriented to provide what is useful to you. Notice how these beasts preserve their proper laws: they haunt that part of the sea which is not navigable. But one may ask, ‘What is their use?’ We ignore what is the mysterious utility of these monsters, but, if we went to take the risk of an explanation, we may say that they lead toward the knowledge of God.”