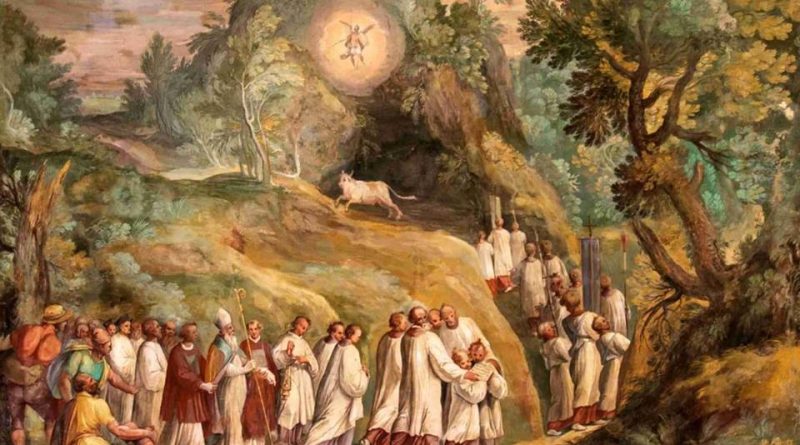 Patronage: against danger at sea, against temptations, ambulance drivers, artists, bakers, bankers, banking, barrel makers, dying people, emergency medical technicians, EMTs, fencers, fencing, Greek Air Force,greengrocers, grocers, haberdashers, hatmakers, hatters, holy death, knights, mariners, milleners, paramedics, paratroopers, police officers, radiologists, radio, therapists, sailors, security guards, sick people, soldiers, Spanish, police officers, storms at sea, swordsmiths, watermen—Belarus, England, Germany, Papua, New Guinea, Vatican City
.
It is evident from Holy Scripture that God is pleased to make frequent use of the ministry of the heavenly spirits in the dispensations of His providence in this world. The Angels are all pure spirits; by a property of their nature they are immortal, as is every spirit. They have the power of moving or conveying themselves at will from place to place, and such is their activity that it is not easy for us to conceive of it. Among the holy Archangels, Saints Michael, Gabriel and Raphael are particularly distinguished in the Scriptures. Saint Michael, whose name means Who is like unto God?, is the prince of the faithful Angels who opposed Lucifer and his followers in their revolt against God. Since the devil is the sworn enemy of God’s holy Church, Saint Michael is given to it by God as its special protector against the demon’s assaults and stratagems.
.
Various apparitions of this powerful Angel have proved the protection of Saint Michael over the Church. We may mention his apparition in Rome, where Saint Gregory the Great saw him in the air sheathing his sword, to signal the cessation of a pestilence and the appeasement of God’s wrath. Another apparition to Saint Ausbert, bishop of Avranches in France, led to the construction of Mont-Saint-Michel in the sea, a famous pilgrimage site. May 8th, however, is destined to recall another no less marvelous apparition, occurring near Monte Gargano in the Kingdom of Naples.
.
In the year 492 a man named Gargan was pasturing his large herds in the countryside. One day a bull fled to the mountain, where at first it could not be found. When its refuge in a cave was discovered, an arrow was shot into the cave, but the arrow returned to wound the one who had sent it. Faced with so mysterious an occurrence, the persons concerned decided to consult the bishop of the region. He ordered three days of fasting and prayers. After three days, the Archangel Saint Michael appeared to the bishop and declared that the cavern where the bull had taken refuge was under his protection, and that God wanted it to be consecrated under his name and in honor of all the Holy Angels.
.
Accompanied by his clergy and people, the pontiff went to that cavern, which he found already disposed in the form of a church. The divine mysteries were celebrated there, and there arose in this same place a magnificent temple where the divine Power has wrought great miracles. To thank God’s adorable goodness for the protection of the holy Archangel, the effect of His merciful Providence, this feast day was instituted by the Church in his honor.
.
It is said of this special guardian and protector of the Church that, during the final persecution of Antichrist, he will powerfully defend it: At that time shall Michael rise up, the great prince who protects the children of thy people. (Dan. 12:1) Compare this text with Chapter 10 of the Apocalypse of Saint John.
.
Reflection. Saint Michael is not only the protector of the Church, but of every faithful soul. By humility he defeated the devil; we who are enlisted in the same warfare must adopt his weapons — humility and ardent love of God. Regarding this Archangel as our leader under God, let us courageously resist the devil in all his assaults with our protector’s famous exclamation: Who is like unto God?
.
Little Pictorial Lives of the Saints, a compilation based on Butler’s Lives of the Saints and other sources by John Gilmary Shea (Benziger Brothers: New York, 1894); Vie des Saints pour tous les jours de l’année, by Abbé L. Jaud (Mame: Tours, 1950)
.
Prayer to Venerate Any Saint
.
Saint Michael
.
I desire therefore, first of all, that supplications, prayers, intercessions, and thanksgivings be made for all men: For kings, and for all that are in high station: that we may lead a quiet and a peaceable life in all piety and chastity. For this is good and acceptable in the sight of God our Saviour, Who will have all men to be saved, and to come to the knowledge of the truth.
(1 Timothy 2:1-4)
.
And another angel came, and stood before the altar, having a golden censer; and there was given to him much incense, that he should offer of the prayers of all saints upon the golden altar, which is before the throne of God. And the smoke of the incense of the prayers of the saints ascended up before God from the hand of the angel. (Rev. 8:3-4)
.
ETERNAL Father, I wish to honor St. (Name), and I give You thanks for all the graces You have bestowed upon him (her). I ask You to please increase grace in my soul through the merits of this saint, and I commit the end of my life to him (her) by this special prayer, so that by virtue of Your goodness and promise, St. (Name) might be my advocate and provide whatever is needed at that hour. Amen.
.
PROMISE: “When you wish to honor any particular saint and give Me thanks for all the graces I have bestowed on that saint, I increase grace in your soul through the merits of that saint. When you commit the end of your life to any of the saints by special prayers, I appoint those saints to be your advocates and to provide whatever you need at that hour.”-Our Lord to St. Gertrude
.
Blessed Anne Catherine Emmerich revealed in her Visions that saints are particularly powerful on their feast days and should be invoked then.