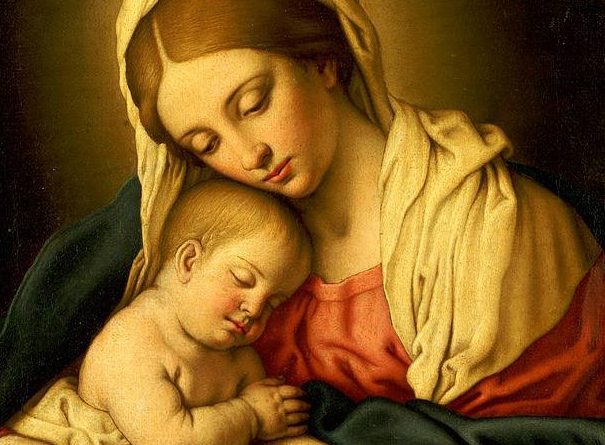 The Blessed John Erolto, who, through humility, called himself The Disciple, relates that there was once a married man who lived in disgrace in the sight of God.
.
His wife, a virtuous woman, not being able to induce him to abandon his vicious courses, entreated him that at least, while he was in so miserable a condition, he would offer this devotion to the mother of God, namely, to say a Hail Mary every time he passed before her altar. He accordingly began to practice this devotion.
.
One night, when he was about to commit a sin, he saw a light, and, on closer observation, perceived that it was a lamp burning before a holy image of the blessed Virgin, who held the Infant Jesus in her arms. He said a Hail Mary, as usual but what did he see?
.
He saw the infant covered with wounds, and fresh blood flowing from them. Both terrified and moved in his feelings, he remembered that he himself too had wounded his Redeemer by his sins, and began to weep, but he observed that the Child turned away from him.
.
In deep confusion, he had recourse to the most holy Virgin, saying:
.
“Mother of mercy, thy Son rejects me; I can find no advocate more kind and more powerful than thou, who art His mother; my queen, aid me, and pray to Him in my behalf.”
.
The divine mother answered him from that image:
.
“You sinners call me mother of mercy, but yet you do not cease to make me the mother of misery, renewing the passion of my Son, and my sorrows.”
.
But because Mary never sends away discontent those who cast themselves at her feet, she began to entreat her Son that He would pardon that miserable sinner.
.
Jesus continued to show Himself unwilling to grant such a pardon, but the holy Virgin, placing the Infant in the niche, prostrated herself before Him, saying:
.
“My Son, I will not leave Thy feet until Thou hast pardoned this sinner.
.
“My Mother,” answered Jesus, “I can deny thee nothing; dost thou wish for his pardon? For love of thee I will pardon him. Let him come and kiss My wounds.”
.
The sinner approached, weeping bitterly, and as he kissed the wounds of the Infant, they were healed. Then Jesus embraced him as a sign of pardon.
.
He changed his conduct, led a holy life, and was ever full of love to the Blessed Virgin, who had obtained for him so great a favor.