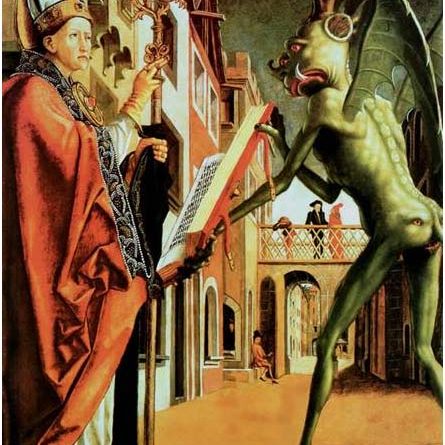 Once, when St Augustine was reading, he saw a demon pass before him carrying a book on its shoulders. He at once commanded it to show him what lay written therein. And the demon said that the sins of men were written therein, which it had gathered from all parts and put down in it.
The saint ordered the demon to let him read the book, to see if any of his own sins were written down in it. When the demon showed him the place under his name, Augustine found nothing written there, except that one time he had forgotten to say Compline.
Commanding the devil to wait for him, Augustine entered a church and said Compline devoutly. Completing the prayers, he returned to the demon, and told it to show him the place (in the book) so that he might read it again.
Turning the pages of the book over and over, the demon found the place empty! He cried out in anger, “You have shamefully deceived me! I regret that I showed you my book, because you have cancelled your sin by the power of your prayers!”
Having spoken thus, it disappeared, confounded.