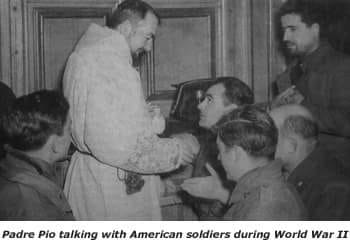 Many Allied aviation pilots of various nationalities (English, American, Polish, Palestinian) and of varied religions (Catholic, Orthodox, Moslem, Protestant, Jewish) who during the Second World War, after September 8, 1943, were based in Bari to undertake missions on Italian territory, had testified , at the risk of.their own jobs, to an impossible occurence they had witness during American bombing raids of Italian Territory. While all the other bombing raids more or less went as planned, each time, while fulfilling their Italian military mission, whenever they approached the zone of the Gargano, in the environs of San Giovanni Rotondo, they saw in the sky Friar who either was flying at them and blocking their planes or who would be Floating in the sky and simply stretching out his wounded hands would prevent their bombing in San Giovanni Rotondo. Foggia and almost all of the centers of Puglia were subjected to repeated bombardment and more or less destroyed; but on San Giovanni Rotondo not one bomb fell.
.
This event, which is to say the least unheard of, was directly witnessed by the General of Aeronautica Italiana Bernardo Rosini, who at that time was part of the “United Air Command” operating out of Bari with the Allied air forces. “Each time that the pilots returned from their missions,” General Rosini told me, “they spoke of this Friar that appeared in the sky and diverted their airplanes, making them turn back.
.
“Everyone laughed at these incredulous stories. But since the episodes kept recurring, the Commanding General decided to intervene personally dismiss this wise tail once and for all. He took command of a squadron of bombers to destroy a cache of German war materials that was said to be right in San Giovanni Rotondo. Up until that time, no one had ever succeeded in dropping a single bomb in that area because of the supposed presence in the air of that mysterious phantasm which forced the airplanes back numerous times and said by numerous witnesses even under threat of disciplinary action.
.
“Since this had been happening for some time, at the base there was much apprehension by the soldiers who some Who haven’t witnessed it wondering if this was some type of illusion somehow put togeather by the Germans. Now with the Gernal personally taking the Reins of this mission all the men were curious to see the results of this operation. When the squadron returned, we went over to ask what had occurred. The American general was quite upset. He recounted that as soon as they arrived near the target, he and his pilots had seen rising up into the sky the figure of a monk with his hands held high. The bombs dropped all by themselves way to early and fail into the Forrest area, and the planes turned in retreat, without any intervention on the part of the pilots.
.
“That evening, the episode was the main topic of conversation. Everyone was wondering who was this specter which the airplanes mysteriously obeyed. Now being in Italy for sometime at that point the Italian people having heard the Allied Service Men stories about the mysterious Monk said to the Servicemen who in returned told the Commanding general that at San Giovanni there lived a Priest with the stigmata whom everyone considered a saint, and that perhaps he was the very one responsible for diverting the planes. The general found this hard to believe, but as soon as it was possible, he wished to go there to find out.
.
“After the war, the general, accompanied by a few pilots, arrived at the Capuchin Convent. As soon as he crossed the threshold of the sacristy, he found himself facing a number of Friars, among whom he recognized immediately the one who had stopped his airplanes. Padre Pio went up to meet him, and putting a hand on his shoulders, said to him: “So it is you, the one who wished to do away with all of us”.
.
“Astonished at seeing and hearing the Friar, the general kneeled before him which was very uncharacteristic of this hardened Military man who also happen to be a devout Protestant. Padre Pio had spoken in his usual Benevento dialect, but the general was convinced that the Priest has spoken in English. The two became friends and the General converted to Catholicism having met a living Saint.