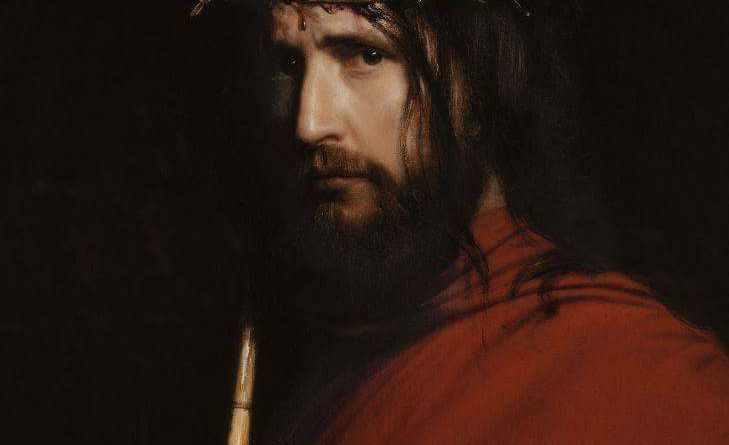 In Rome there was a woman known by the name of ‘Catherine the Fair,’ who was leading a most disorderly life. She once heard Saint Dominic preaching on the devotion of the Rosary, had her name enrolled in the confraternity, and began to recite it, but without changing her life. One evening a young man of noble mien came to visit her: she received him with courtesy, but, whilst they were at supper, she remarked, that as he was cutting bread drops of blood fell from his hands, and then she saw that there was blood on all the food he took. She asked him what was the meaning of this. The young man replied, that ‘the food of a Christian should be tinged with the blood of Jesus Christ, and seasoned with the remembrance of His passion.’ Astonished at such an answer, Catherine asked him who he was. ‘Later,’ he said, ‘I will tell you.’ Then going into an adjoining room, the appearance of the young man changed; he was crowned with thorns; his flesh all mangled and torn; and he said: ‘Desirest thou to know Who I am? Dost thou not recognize Me? I am thy Redeemer. O, Catherine, when wilt thou cease offending Me? See what I have endured for thee. Thou hast now tormented Me enough; change thy life.’
.
Catherine burst into sobs and tears, and Jesus, encouraging her, said: ‘Love Me now as much as thou hast offended Me; and know that I have granted thee this grace on account of the Rosary thou hast recited in honor of My Mother.’ He then disappeared. On the next morning Catherine went to confession to Saint Dominic, distributed all she had to the poor, and ever afterwards led so holy a life that she attained a very high degree of perfection. Our Blessed Lady appeared many times to her, and our Lord Himself revealed to Saint Dominic that this penitent had become very dear to Him.