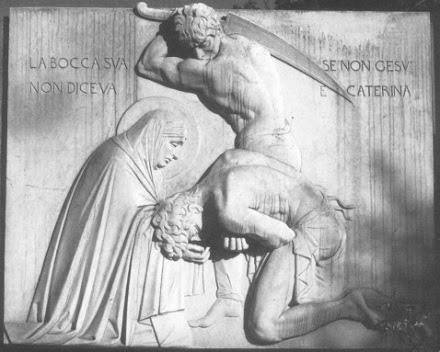 A young Perugian nobleman, Niccolo di Toldo, who had been sentenced to death. He had never practiced Catholicism, never even made his First Communion. When the priest, who was a friend of Catherine’s, went to prepare him for death, the priest found him half-mad with rage and despair and could do nothing with him. Catherine, hearing of what had passed, went at once to the prison. The poor young man, hardly more than a boy in years, was touched at once by her gentle words and clung to her as a child clings to its mother. She stayed with him, comforting and soothing him till he was ready for Confession. When she left the prison, Catherine promised to come again the next day and go with him to the place of execution. At break of day she returned, went to Mass with the poor prisoner, and knelt beside him while he received Holy Communion for the first time in his life. “Take courage, my brother,” she said, “for you are going to die washed in the adorable Blood of Jesus and with His sweet name on your lips.” At this Niccolo was filled with strength and consolation so that he no longer feared to die; but Catherine went with him to the place of execution and, kneeling beside him, made the Sign of the Cross on his brow. There she remained, bending over him and speaking to him of God and of the life to come until the knife fell when she received his head in her hands. Standing thus in ecstasy, with the blood of the young man flowing over her white robe, Catherine had a vision of his soul as it entered Heaven turning to her in the joy of that new birth with a radiant look of farewell. “And all who were present,” says he who wrote the account of it, “watching that strange scene in a deep hush of devotion, felt as if they were assisting at the death of a martyr rather than that of a criminal.”