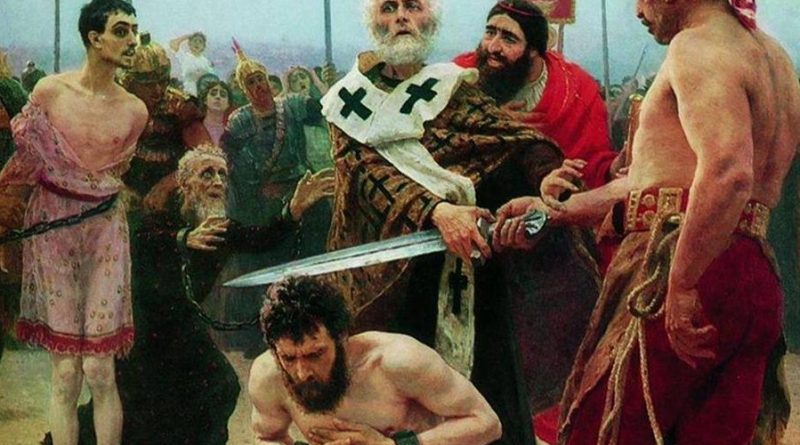 During the reign of Constantine one of his earliest known deeds, Stratelatis,is told. It dates to around 400 AD. There was a revolt in the city of Phrygia in Asia Minor which caused Emperor Constantine to send three legions commanded by three generals (named Nepotian, Ursus, and Herpylion) to put the rebellion down. To obtain food and supplies, they stopped at the port of Andriaki, near Myra. A riot broke out between the soldiers and the merchants. Saint Nicholas came to convince the generals to control their soldiers and restore peace. He invited the generals to dine with him and they started on their way back to Myra. On the way back he was brought the news that three innocent men were about to be executed by beheading. Nicholas ran to the place and found the three men with their faces covered, hands bound behind their backs, expecting death. The executioner’s sword was up and ready to fall. At that moment, Nicholas, embodying the scripture, “The righteous are bold as a lion” (Proverbs 28:1) stepped between them and caught the sword with his bare hands, wrestled it away, and threw it to the ground. He then summoned the prefect who tried to pass the buck on to two other men named, Eudoxius and Simonides. Bishop Nicholas replied, “It is not Eudoxius and Simonides who did this, but silver and gold.”, because it was known by Nicholas that he had taken a bribe of 200 pounds of silver to execute the innocents. The prefect repented on the spot and the three men were cleared. The three generals continued on with their mission and restored order to Phrygia. When they returned to Constantinople they were greatly rewarded and were also greatly envied by their rival officers. The rival officers spread lies, claiming the three generals were actually part of a plot to animate the Emperor. These lies were believed and the three generals were scheduled to be executed.
.
The generals, remembering what they had seen done by Saint Nicholas for those other three innocent men, began asking for God that Saint Nicholas would also to come to their aid in this manner:
.
“Lord, God of our Father Nicholas, who saved the three men of Myra from an unjust death, come, Lord, and do not forget us who are in danger of our lives. Free us from the hands of our enemies. Do not delay, for we are condemned to die tomorrow.”
.
That night as the Emperor slept he was given a dream of a man telling him to release the generals immediately because they were innocent. The emperor asked who the man was and he replied, “The Bishop Nicholas of Myra, a sinner; God has sent me to tell you to free these men without delay.” The same dream was also given to the prefect. In the morning the Emperor and the prefect told each other each’s dream. They then approached the accused and asked them is they knew anyone by the name of Nicholas. They were immediately uplifted in spirit and told the Emperor about Saint Nicholas and what he had done for the three innocents in Myra. Hearing their story, he released them, and commanded that they give gifts to Nicholas, which were from Constantine. They did as they were commanded and thanked Saint Nicholas for saving them, but Nicholas told them not to thank him, but God, the one who truly saved them from death.