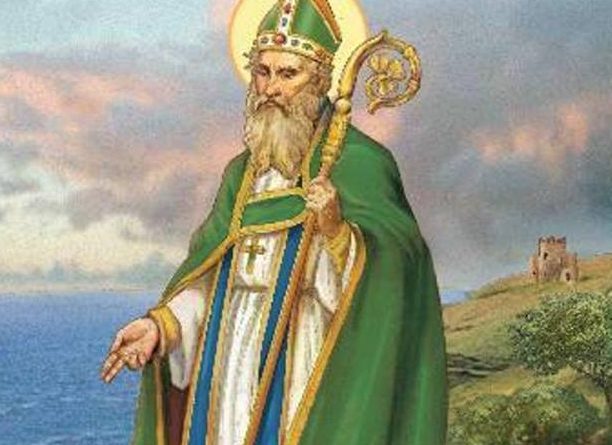 ow Saint Patrick Wrestled with God and Won 5 Graces for the Irish Nation
.
.
When not engaged in the work of the sacred ministry, Saint Patrick spent time in prayer.
.
The whole purpose of his prayer was to obtain special blessings and mercy for the Irish race, whom he evangelized. The demons that made Ireland their battlefield mustered all their strength to tempt the saint and disturb him in his solitude, and turn him away, if possible, from his pious purpose.
.
Once Saint Patrick started a fast on the summit of Mount Croagh Patrick for forty days in the fifth century A.D to overcome the devil and obtain from God some Promises.
.
The devils infuriated with Saint Patricks Ministry up to this point all gathered around the hill in the form of vast flocks of hideous birds of prey. So dense were their ranks that they seemed to cover the whole mountain, like a cloud, and they so filled the air that Patrick could see neither sky nor earth nor ocean. Saint Patrick besought God to scatter the demons, but for a time it would seem as if his prayers and tears were in vain. At length he rang his sweet-sounding bell, symbol of his preaching of the Divine truths.
.
Its sound was heard all over the valleys and hills of Erin, everywhere bringing peace and joy. The flocks of demons began to scatter. He flung his bell among them; they took to precipitate flight, and cast themselves into the ocean. So complete was the saint’s victory over them that, as the ancient narrative adds, “for seven years no evil thing was to be found in Ireland.”
.
The saint, however, would not, as yet, descend from the mountain. He had vanquished the demons, but he would now wrestle with God Himself, like Jacob of old, to secure the spiritual interests of his people. The angel had announced to him that, to reward his fidelity in prayer and penance, as many of his people would be gathered into heaven as would cover the land and sea as far as his vision could reach.
.
Far more ample, however, were the aspirations of the saint, and he resolved to persevere in fasting and prayer until the fullest measure of his petition was granted. Again and again the angel came to comfort him, announcing new concessions; but all these would not suffice. He would not relinquish his post on the mountain, or relax his penance, until all were granted. At length the message came that his prayers were heard and his Concessions granted: 1. many souls would be free from the pains of purgatory through his intercession, 2. whoever in the spirit of penance would recite his hymn before death would attain the heavenly reward. 3. Barbarian hordes would never obtain sway in his Church. 4. Seven years before the Judgment Day, the sea would spread over Ireland to save its people from the temptations and terrors of the Antichrist. And the greatest blessing of all, 5. Patrick himself should be deputed to judge the whole Irish race on the last day.
.
Such were the extraordinary favors which Saint Patrick, with his wrestling with the Most High, his unceasing prayers, his unconquerable love of heavenly things, and his unremitting penitential deeds, obtained for the people whom he evangelized.