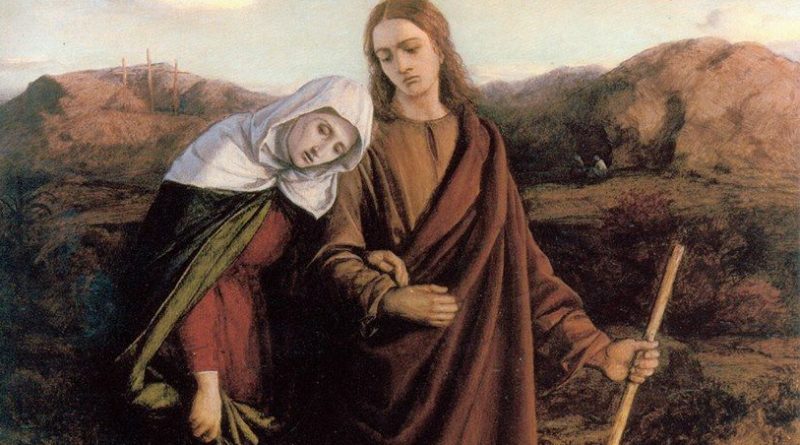 Saint John has called himself “the disciple whom Jesus loved.” He had a meek and gentle heart and through his relationship to our Lord was intimate with Him from his infancy. One day Mechtilde was anxious to know if our Lord had renewed His intimacy with his relatives on His return from Egypt. He replied: “How comes it, do you think, that it is said in the Holy Gospels: ‘They sought Him amongst their kin folk and acquaintance’, if I was not sometimes with them? And how came it that Saint John the Evangelist was so prompt in following Me, when I called him, after the marriage, if My manner of life and character had not pleased him, for he knew Me well, which made his obedience in following Me so easy.” If Jesus loved Saint John more than the other apostles, was it not because Saint John loved Him more than did his companions? For this reason he was allowed to rest his head on the breast of his divine Master at the Last Supper. In ecstasy at such a grace Mechtilde asked our Lord how she could show her love and praise Him on His disciple’s account. “First, you shalt praise Me,” replied Jesus, “on account of the nobility of his birth, for he belongs to My family, the most noble on the earth; second, that I called him from the marriage to the apostolate; third, that he deserved to see the beauty of My face on the mountain in preference to others; fourth, that at the Last Supper he deserved to rest on My breast; fifth, that he more than others received the gift of know ledge, so that he was able to write for others the prayer I said on the Mount of Olives; sixth, because by particular love, I, on the Cross, gave him My Mother to guard; seventh, that after My Resurrection I gave him special lights, which caused him to recognize Me when, driven before the storm, he cried out with the other disciples: It is the Lord (John 21:7); eighth, that by a special privilege, due to My love, I revealed to Him My mysteries when he wrote the Apocalypse, and through My divine inspiration he was able to write in his Gospel: In the beginning was the Word, which truth was unknown to the Prophets and to other men; ninth, that, for My glory, he drank poison; tenth, that in My Name he worked many miracles and raised the dead; eleventh, that I rejoiced him by My many appearances and that I invited him to My banquet with his brothers; twelfth, that I exempted him from all bodily pains and led him gloriously from this exile to eternal joy.” The Sacred Heart not only willed to reward his well-beloved disciple while on earth, but He has also raised him to a high degree of glory in heaven. “Saint John received in all his faculties something higher than all the other saints. His eyes see more clearly the inaccessible light of the divinity. His ears catch more quickly, for the nourishment of his soul, the sweet whisper which comes from God. His mouth and tongue taste greater sweetness. But above all his heart burns with a more delicious love of God and springs with freer and more sublime flights into the most inaccessible heights of the divinity.”
.
PRAYERS AND DEVOTIONS TO SAINT JOHN THE EVANGELIST
.
A Daily Our Father in Honor of St. John the Evangelist
.
“If any person says a Pater Noster daily, in honor of this Apostle, reminding him of the sweet fidelity with which his heart was filled when I taught this prayer, he will not fail to obtain the grace of persevering faithfully in virtue, even to the end of his life.” (Our Lord Jesus to Saint Gertrude)
.
.
Prayer for Parents to St. John
.
St. John, chosen and favored disciple of our Lord, selected as the son of His sorrowful Mother, how great your privilege of being allowed to repose on the bosom of Jesus at the Last Supper, and to stand beneath the cross, there to receive Mary for your spiritual Mother! O happy disciple! How did you deserve such great prerogatives and favors? The whole Christian Church knows and acknowledges that it was your carefully guarded virginal purity which made you worthy of the special love of Jesus Christ; and that it was your ardent love and filial reverence toward His Blessed Mother that strengthened your heart to persevere to the end in the way of His holy cross.
.
O happy child of our dear Lady, how greatly I desire that my children and I may resemble you in purity of heart, in love for Jesus, and in devotion towards His Virgin Mother! In you do we place our trust. You will obtain for us this threefold grace. By your intercession you will dispose the Divine Mercy to pour out these graces into our hearts also. You are so highly favored by our Divine Master, He can refuse you nothing, least of all the graces He has so lavishly bestowed upon you. We confidently hope for these graces through your intercession, O chaste disciple of Jesus and devoted son of Mary! When you have obtained them for us, you must likewise watch over them, that we may never again lose them during our whole life. O pure St. John, obtain our request for the honor of Jesus and Mary and your own eternal praise! Amen.