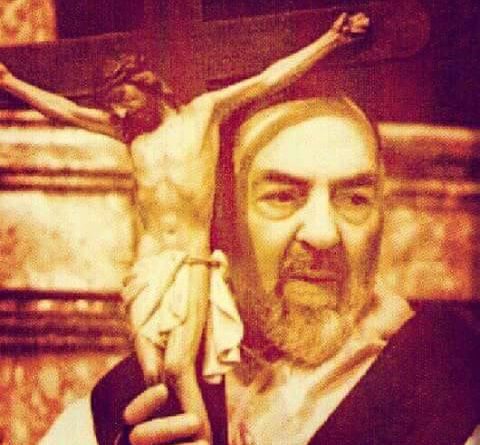 March 1913, Padre Pio wrote his confessor, Fr. Agostino, and told him the following: “Friday morning I was still in bed when Jesus appeared to me. He was very sad and upset. He showed me a multitude of priests regular and secular, among them various ecclesiastical dignitaries. Some were celebrating the Holy Sacrifice of the Mass. Others were putting on the sacred vestments; still others were taking them off. “The sight of Jesus in distress gave me much pain, so I asked Him why He was suffering so much. He did not reply, but kept looking towards those priests. When He became tired of looking. He glanced away. He raised his eyes towards me and two tears ran down His cheeks. He walked away from the crowd of priests with an expression of disgust and scorn, crying: ‘Butchers!’ Turning to me He said: ‘My son, do not believe that my agony lasted only three hours. No, I shall be in agony until the end of the world because of those for whom I have done the most. During my agony, my son, we must not sleep. My soul seeks a few drops of human pity. But alas, they leave me alone under the weight of indifference. The ingratitude and the sleep of my ministers make my agony more difficult to bear. Alas, how they return my love. What pains me even more is that they add scorn and unbelief to their indifference. How many times I was ready to destroy them, but I was held back by the angels and the souls that love me. Write to your confessor and tell him what you have seen and what you have heard this morning. Tell him to show your letter to the Provincial.”While praying in church. Padre Pio heard Jesus say the following: “With what ingratitude is my love for men repaid! I should be less offended by them if I had loved them less. My Father does not want to bear with them any longer. I myself want to stop loving them, but, alas! My heart is made to love! Weak and cowardly men make no effort to overcome temptation and indeed they take delight in their wickedness. The souls for whom I have a special predilection fail me when put to the test, the weak give way to discouragement and despair, while the strong are relaxing by degrees. They leave me alone by night, alone by day in the churches. They no longer care about the Sacrament of the altar. Hardly anyone ever speaks of this Sacrament of love, and even those who do, speak, alas, with great indifference and coldness. My heart is forgotten; Nobody thinks anymore of my love and I am continually grieved. For many people my house has become an amusement center. . . I behold, my son. . . many people who act hypocritically and betray me by sacrilegious communions, trampling under foot the light and strength which I give them continually.