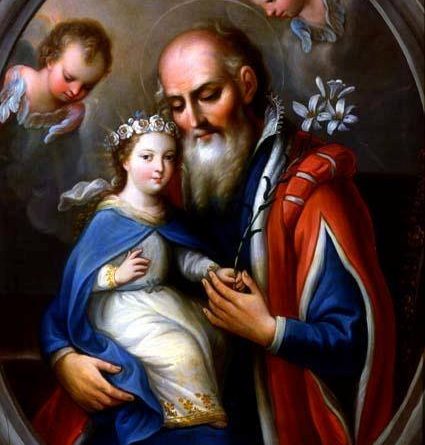 I saw now that the angel touched or anointed Joachim’s forehead with the tip of his thumb and forefinger, and that he gave him a shining morsel to eat and a luminous liquid to drink from a gleaming little chalice which he held between two fingers. It was of the shape of the chalice at the Last Supper, but without a foot. It seemed to me, too, that this food which he put in his mouth took the form of a little shining ear of corn and a little shining cluster of grapes, and I understood that thereafter every impurity and every sinful desire left Joachim. Thereupon I saw that the angel imparted to Joachim the highest and holiest fruit of the blessing given by God to Abraham, and culminating, through Joseph, in the holy thing within the Ark of the Covenant, in the presence of God among His people. He gave Joachim this blessing in the same form as I had been shown before, except that while the angel of benediction gave Abraham the blessing from himself, out of his bosom as it were, he seemed to give it to Joachim from out of the Holy of Holies. The blessing of Abraham was as it were the beginning of God’s grace given in blessing to the father of His future people so that from him might proceed the stones for the building of His Temple. But when Joachim received the blessing, it was as though the angel were taking the holy benediction from the tabernacle of this Temple and delivering it to a priest, in order that from him might be formed the holy vessel in which the Word was to be made Flesh. All this cannot be expressed in words, for I speak of that Holy of Holies inviolate, yet violated in man when he sinned and fell. From my earliest youth I have very often, in my visions from the Old Testament, seen into the Ark of the Covenant, and have always had the impression of a complete church, but more solemn and awe-inspiring. I saw therein not only the Tables of the Law as the written Word of God, but also a sacramental presence of the Living God, like the roots of the wine and wheat and of the flesh and blood of the future sacrifice of our redemption. The grace given by this blessed presence produced, with the cooperation of God-fearing men under the Law, that holy tree whose final blossoming was the pure flower in which the Word became flesh and God became Man; thus, giving us, in the New Covenant, His humanity and His divinity by instituting the Sacrament of His Body and Blood, without which we cannot attain eternal life. I have never known the Ark of the Covenant without the sacramental presence of God except when it had fallen into the hands of the enemy, at which times the holy presence was safe in the hands of the high priest or of one of the prophets. When only the Tables of the Law were present in the Ark of the Covenant, without the holy treasure, it seemed to me like the Temple of the Samaritans on Mount Garizim, or like a church of our own time which is without the Blessed Sacrament and, instead of the Tables of the Law written by God’s hand, contains only the books of Holy Scripture imperfectly understood by mankind. In the Ark of the Covenant made by Moses, which stood in the Temple and Tabernacle of Solomon, I saw this most Holy Thing of the Old Covenant in the form of a shining circle crossed by two smaller rays of light intersecting each other; but now, when the angel imparted the blessing to Joachim, I saw this blessing being given to him in the form of something shining, like a shining seed or bean in shape, which he laid in the open breast of Joachim’s garment. When the blessing was imparted to Abraham, I saw grace being conveyed to him in the same manner, and its virtue and efficacy remaining with him in the degree ordained by God until he handed it over to his firstborn son Isaac, from whom it passed to Jacob and from him, through the angel, to Joseph, and from Joseph and his wife, with increased virtue, to the Ark of the Covenant. I perceived that the angel bound Joachim to secrecy, and I understood why it was that later Zechariah, the Baptist’s father, had become dumb after he had received the blessing and the promise of Elizabeth’s fruitfulness from the Angel Gabriel at the Altar of Incense. [ St. Luke 1.9-22.] It was revealed to me, that with this blessing Joachim received the highest fruit and the true fulfillment of Abraham’s blessing, namely the blessing for the immaculate conception of the most Holy Virgin who was to bruise the head of the serpent. The angel then led Joachim back into the Holy Place and disappeared, upon which Joachim sank to the ground in an ecstasy as though paralyzed. The priests who re-entered the Holy Place found him radiant with joy. They lifted him up reverently, and placed him outside in a seat generally used only by priests. Here they washed his face, held some strong-smelling substance to his nostrils, gave him to drink and in general treated him as one does someone who has fainted. When he had recovered, he looked young and strong, and was beaming with joy.