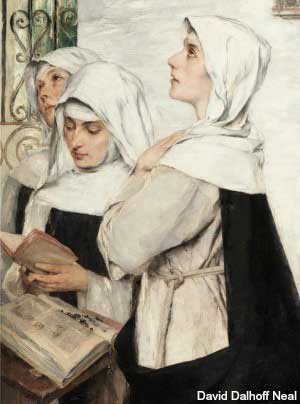 Many centuries ago, three young nuns lived together in a convent. Day after day, they took their meals together, they went to chapel together, and they prayed and sang together. One day, their priest-confessor advised them that, as a preparation for the feast of the purification of Mary, they should recite the whole Rosary every day for forty days. The three nuns obediently complied. On the night before that holy feast day, the Heavenly Mother appeared to the three nuns as they gathered in the choir. To the first of these three sisters she handed a rich garment, embroidered with gold. Holy Mary thanked her and blessed her.
.
She then handed to the second nun a much simpler garment, and also thanked her. Noticing the difference in the two garments, the second sister asked, “Oh Lady, why have you brought my sister a richer garment?” Mary Most Holy lovingly replied, “Because she has clothed me more richly with her prayers than you have done.”
.
Mary then approached the third nun with a canvas garment. Being an observant young lady, this sister at once asked pardon for the half-hearted way in which she had prayed her rosaries.
.
A full year had passed when all three fervently prepared for the same feast, each saying her Rosary with great devotion. On the evening preceding the festival, Mary appeared to them in glory, and said to them: “Be prepared, for tomorrow you shall come to paradise.”

The following morning dawned, full of promise. Each nun wondered if this would be her last day in this vale of tears. When evening came, would they retire to their modest cells once more, or did Holy Mary have something else in store for them? The sisters related to their confessor what had occurred, and received communion in the morning. At the hour of compline (evening prayers) they saw again the most holy Virgin, who came to take them with her. Amid the songs of angels, one after the other sweetly expired.
(3 HAIL MARY’S IN HONOR OF OUR LADY’S GIFT OF THE THREE DRESSES)
.
From the Glories of Mary, by St. Alphonsus Maria de Liguori.