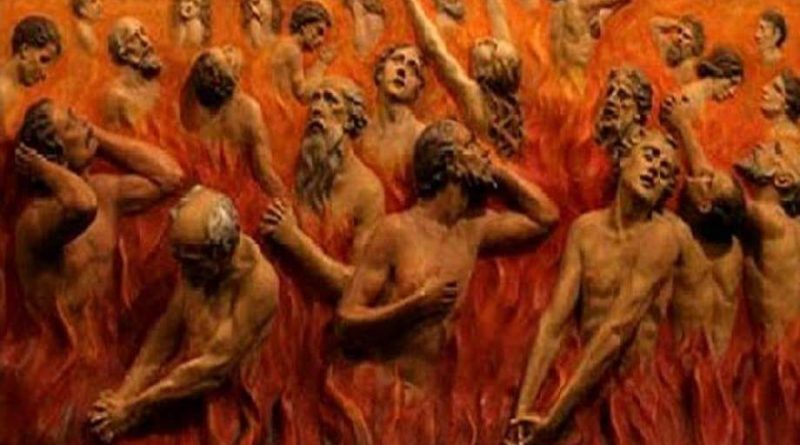 Sister Maria Serafina, a Redemptorist nun in 1970 Malines, Belgium, was suddenly seized with inexplicable sadness. Soon after, she received the news that her father had died in that war. From that day on, Sister Maria repeatedly heard distressing groans and a voice saying, “My dear daughter, have mercy on me!” Subsequently, she was besieged with torments, which included unbearable headaches. While laying down one day, she saw her father surrounded with flames and immersed in profound sadness. He was suffering in Purgatory and had received permission from God to beseech prayers from his daughter and relate Purgatory’s suffering to her. Thus he said: I want you to have Masses, prayers and indulgences said on my behalf. Look how I am immersed in this fire-filled hole! Oh! If people knew what Purgatory is, they would suffer anything to avoid it and alleviate the suffering of souls here. Be very holy, my daughter, and observe the Holy Rule, even in its most insignificant points. Purgatory for religious is a terrible thing! Sister Maria saw a pit full of flames, spewing black clouds of smoke. Her father was immersed in the pit where he was burning, horribly suffocated and thirsty. Opening his mouth she saw that his tongue was entirely shriveled. “I am thirsty, my daughter, I am thirsty.” The next day, her father visited her again saying, “My daughter, it has been a long time since I saw you last.” “My father, it was just yesterday . . .” “Oh! It seems like an eternity to me. If I stay in Purgatory three months, it will be an eternity.
.
.
GOD’S JUSTICE EVEN TO THE HOLIEST AMONGST US
.
This severity of Divine Justice in regard to the most fervent souls is explained by the infinite Sanctity of God, who discovers stains in that which appears to us most pure. The Annals of the Order of St. Francis speak of a Religious whose eminent sanctity had caused him to be surnamed Angelicus. (Chronique des Frères Min., p. 2, I, 4. c. 8; cf. Rossignoli) He died in odor of sanctity at the monastery of the Friars Minors in Paris, and one his brethren in religion, a doctor in theology, persuaded that, after a life so perfect, he had gone directly to Heaven, and that he stood in no need of prayers, omitted to celebrate for him the three Masses of obligation which, according to the custom of the Institute, were offered for each departed member.
.
After a few days, whilst he was walking and meditating in a retired spot, the deceased appeared before him enveloped in flames, and said to him, in a mournful voice, “Dear master, I beg of you have pity upon me!” “What! Brother Angelicus, do you need my assistance?” “I am detained in the fires of Purgatory, awaiting the fruit of the Holy Sacrifice which you should have offered three times for me.” “Beloved brother, I thought you were already in possession of eternal glory. After a life so fervent and exemplary as yours had been, I could not imagine that there remained any pain to be suffered.” “Alas! alas!” replied the departed, “no one can believe with what severity God judges and punishes His creatures. His infinite Sanctity discovers in our best actions defective spots, imperfections which displease Him. He requires us to give an account even to the last farthing.
.
.
OUR DUTY TO THE HOLY SOULS IN PURGATORY
.
.
Our Lord wishes people to pray for the souls in purgatory. He once showed Gertrude a table of gold on which were many costly pearls. The pearls were prayers for the holy souls. At the same time the saint had a vision of souls freed from suffering and ascending in the form of bright sparks to heaven.

In one Vision, Our Lord tells Gertrude that he longs for someone to ask Him to release souls from purgatory, just as a king who imprisons a friend for justice’s sake hopes that someone will beg for mercy for his friend. Jesus ends with:

“I accept with highest pleasure what is offered to Me for the poor souls, for I long inexpressibly to have near Me those for whom I paid so great a price. By the prayers of thy loving soul, I am induced to free a prisoner from purgatory as often as thou dost move thy tongue to utter a word of prayer.”

HOW TO HELP THE HOLY SOULS IN PURGATORY
.
The recital of the Rosary (with its great indulgences) and making the Way of the Cross (which is also richly indulgenced) are excellent means of helping the Holy Souls.
.
St. John Massias, as we saw, released from Purgatory more than a million souls, chiefly by reciting the Rosary and offering its great indulgences for them.
.
Another easy and efficacious way is by the constant repetition of short indulgenced prayers [applying the indulgence to the Souls in Purgatory]. Many people have the custom of saying 500 or 1,000 times each day the little ejaculation, “Sacred Heart of Jesus, I place my trust in Thee!” or the one word, “Jesus. ” These are most consoling devotions; they bring oceans of grace to those who practice them and give immense relief to the Holy Souls. Those who say the ejaculations 1,000 times a day gain 300,000 days Indulgence! What a multitude of souls they can thus relieve! What will it not be at the end of a month, a year, 50 years? And if they do not say the ejaculations, what an immense number of graces and favors they shall have lost! It is quite possible — and even easy — to say these ejaculations 1, 000 times a day. But if one does not say them 1,000 times, let him say them 500 or 200 times.
.
ALMS HELP THE HOLY SOULS IF GIVEN IN THEIR NAME
.
St. Martin gave half of his cloak to a poor beggar, only to find out afterwards that it was to Christ he had given it. Our Lord appeared to him and thanked him.
.
Blessed Jordan of the Dominican Order could never refuse to give an alms when it was asked in the Name of God. One day he had forgotten his purse. A poor man implored an alms for the love of God. Rather than refuse him, Jordan, who was then a student, gave him a most precious cincture or “girdle” which he prized dearly. Shortly after, he entered a church and found his cincture encircling the waist of an image of Christ Crucified. He, too, had given his alms to Christ. We all give our alms to Christ.
.
RESOLUTION
.
a) Let us give all the alms we can afford;
b) Let us have said all the Masses in our power and say as many Rosaries for them as Possible
c) Let us hear as many Masses as possible;
d) Let us offer all our pains and sufferings for the relief of the Holy Souls.
.
We shall thus deliver countless Souls from Purgatory, who will repay us ten thousand times over.
.
OFFERING OF DAILY ACTIONS
.
ETERNAL Father, by virtue of Thine generosity and love, I ask that
Thou accept all my actions, and that Thou dost multiply their value in
favor of every soul in Purgatory. Through Christ Our Lord. Amen.
.
THE HEROIC ACT IN FAVOR OF THE SOULS IN PURGATORY
.
O MY GOD! for Your greater glory, and to imitate as closely as possible the generous Heart of Jesus, my Redeemer, and also to testify my devotion to the Blessed Virgin, my Mother, who is also the Mother of the Souls in Purgatory, I place in her hands all my satisfactory works, as well as the fruit of all those which may be offered for my intention after my death, that she may apply them to the Souls in Purgatory according to her wisdom and good pleasure. Amen.
.
This Heroic Act of Charity is the completely unselfish offering to God of all the satisfactory value of one’s prayers and good works — plus the value of any that might be offered for one after one’s death — for the benefit of the Souls in Purgatory, rather than for oneself. The “satisfactory value” of a good work is its value with regard to making up for our sins and reducing our stay in Purgatory. However, the “meritorious value” of our good works is inalienable, i.e., our merits, which give us a right to an increase of glory in Heaven, cannot be applied to anyone else. Moreover, a person who has made the Heroic Act may still pray for himself, friends and other intentions.
.
The Heroic Act is revocable at will and is not a vow. Its actual ratification depends on the will of God. By making this act with purity of intention, one is relying upon the mercy of God and the prayers of the Communion of Saints to assist his soul after death. The Heroic Act was approved and encouraged by Pope Benedict XIII [1724-1730].
.
According to the Raccolta of 1932: The faithful who make the Heroic Act in favor of the Souls detained in Purgatory, may gain an indulgence.” At the time this was a plenary indulgence with special conditions attached , such as attending Mass, receiving Holy Communion in supplication for the Holy Souls, etc.
.
His Holiness, Leo XIII, Jan. 17, 1888, granted to the faithful who shall perform some pious practice for the relief of the Souls in Purgatory, every day during the whole month of November, whether in public or in private, an indulgence of seven years and as many quarantines on each day of the month; a plenary indulgence, once during the same month, on any day of the month, on the usual conditions: confession and communion, and a visit to a church or public oratory, and there praying for the intention of the Sovereign Pontiff.