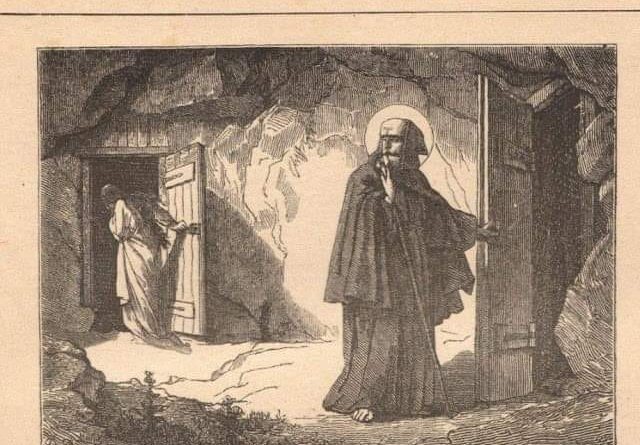 Abraham was a rich nobleman of Edessa, born in the year 300. Ceding to his parents’ desire, while still very young he married, but escaped to a cell near the city as soon as the feast was over. His family searched for him for seventeen days, and were still more astonished when they found him. Why are you surprised? he asked them. Admire instead the favor God has granted me, the grace to bear the yoke of His service, which He has wanted to impose on me without regard to my unworthiness. He walled up his cell door, leaving only a small window open for the food which would be brought to him from that time on.
.
The wealth which fell to Saint Abraham by the death of his parents ten years after his retirement, he gave to the poor by the good offices of a friend, to whose probity he entrusted the commission. Since many were seeking him out for advice and consolation, the Bishop of Edessa ordained him priest, overruling his humility. Soon after his ordination, he was sent to an idolatrous city which had hitherto been deaf to every messenger. He was insulted, beaten, and three times banished, but he returned each time with fresh zeal. For three years he pleaded with God for those souls, and in the end prevailed. Every citizen came to him for Baptism. After providing for their spiritual needs he went back to his cell, more than ever convinced of the power of prayer.
.
In that cell, then, for fifty years, he would continue to sing God’s praises and implore mercy for himself and for all men. Saint Ephrem wrote of him that a day did not pass without his shedding tears; but that despite his constant and severe penance, he always maintained an agreeable disposition and a healthy and vigorous body. He never reproved anyone with sharpness, but all he said was seasoned with the salt of charity and gentleness.
.
His brother on dying left an only daughter, Mary, to the Saint’s care. He placed her in a cell near his own, and devoted himself to training her in perfection. After twenty years of innocence she grew lax and fled to a distant city, where she drowned the voice of her conscience in sin. For two years the Saint and his friend Saint Ephrem prayed earnestly for her. Then Abraham went in disguise to seek the lost sheep, and had the joy of bringing her back to the desert a true penitent. She received the gift of miracles, and her countenance after death shone as the sun. Saint Abraham died five years before her, in about 360. All of Edessa came for his last blessing and to secure his relics.
.
Reflection. Oh, that we might realize the omnipotence of prayer! Every soul was created to glorify God eternally; and it is in the power of everyone to add to the glory of God by the salvation of his neighbor. Let us make good use of this talent of prayer.
.
Prayer to Venerate Any Saint
.
Saint Abraham Solitary and Priest: Feast Day March 16
.
I desire therefore, first of all, that supplications, prayers, intercessions, and thanksgivings be made for all men: For kings, and for all that are in high station: that we may lead a quiet and a peaceable life in all piety and chastity. For this is good and acceptable in the sight of God our Saviour, Who will have all men to be saved, and to come to the knowledge of the truth.
(1 Timothy 2:1-4)
.
And another angel came, and stood before the altar, having a golden censer; and there was given to him much incense, that he should offer of the prayers of all saints upon the golden altar, which is before the throne of God. And the smoke of the incense of the prayers of the saints ascended up before God from the hand of the angel.
(Rev. 8:3-4)
.
ETERNAL Father, I wish to honor St. (Name), and I give Thee thanks for all the graces Thou has bestowed upon him (her). I ask Thee to please increase grace in my soul through the merits of this saint, and I commit the end of my life to him (her) by this special prayer, so that by virtue of Thy goodness and promise, St. (Name) might be my advocate and provide whatever is needed at that hour. Amen.
.
PROMISE: “When you wish to honor any particular saint and give Me thanks for all the graces I have bestowed on that saint, I increase grace in your soul through the merits of that saint. When you commit the end of your life to any of the saints by special prayers, I appoint those saints to be your advocates and to provide whatever you need at that hour.”-Our Lord to St. Gertrude
.
Blessed Anne Catherine Emmerich revealed in her Visions that saints are particularly powerful on their feast days and should be invoked then
.