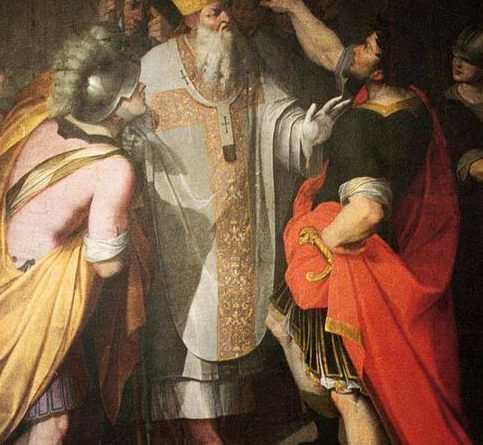 When in the year 369 Saint Ambrose, the young son of a Roman Senator, was sent by Probus, the Prefect of Italy, to the large province of Liguria Emilia in Italy, the officer said to him, Go and act not as a judge, but as a bishop. Ambrose, though not Christian, had already resisted by his probity the corrupting influence of the Roman youth of his day. In Liguria he showed himself to be clement as directed, and his great erudition also became well known to the inhabitants of the region. In the year 374 he was already governor of the province, at the moment when at Milan, in this same region, a bishop was needed for that great see. Since the heretics in Milan were many and fierce, he went to preserve order during the election of the new prelate. Though he was still only a catechumen, it was the Will of God that the provincial governor be chosen by acclamation. Despite his protestations and his subsequent flight from Milan when they were not accepted, he was found, baptized and consecrated for the archiepiscopal see.
Unwearied then in every pastoral duty, full of sympathy and charity, gentle and condescending in matters of indifference, he was inflexible in questions of principle. He manifested his fearless zeal when it was necessary to brave the anger of the Empress Justina, by resisting and foiling her impious attempt to give one of the churches of Milan to the Arians. He distributed all that he had of gold and silver to the poor, and confided all financial administration of his archdiocese to his brother, Saint Satyrus, who came to reside with him in Milan. To master theology, he studied the Sacred Scriptures and the Fathers of the Church, and conferred with learned Christians concerning the rules of ecclesiastical discipline. He was very active, and took such great care of the catechumens’ instruction that no one could surpass him in that duty.
His zeal in rebuking and bringing to penance the great Emperor Theodosius, who in a moment of irritation had cruelly punished a sedition by the inhabitants of Thessalonica, is a well known fact of history. The Saint met him at the door of the cathedral to prevent his entering, and said to him that if he had imitated David in his crime, he must now imitate him in his penance. Later the chastened and humble Emperor said that in his life he had known but one true bishop — Ambrose.
Saint Ambrose was the friend and consoler of Saint Monica in all her sorrows, and in 387 had the joy of admitting to the Church Saint Augustine, her son. He died in 397, full of years and of honors, and is revered by the Church of God as one of her greatest Doctors.
Reflection: Whence came to Saint Ambrose his grandeur of mind, his clearness of insight, his intrepidity in maintaining the faith and discipline of the Church? Whence, if not from his contempt of the world and his fear of God alone?
.
Prayer to Venerate Any Saint
Saint Ambrose: Feast Day December 7
Rev. 8:3-4 [3] And another angel came, and stood before the altar, having a golden censer; and there was given to him much incense, that he should offer of the prayers of all saints upon the golden altar, which is before the throne of God. [4] And the smoke of the incense of the prayers of the saints ascended up before God from the hand of the angel.
ETERNAL Father, I wish to honor St. (Name), and I give You thanks for all the graces You have bestowed upon him (her). I ask You to please increase grace in my soul through the merits of this saint, and I commit the end of my life to him (her) by this special prayer, so that by virtue of Your goodness and promise, St. (Name) might be my advocate and provide whatever is needed at that hour. Amen.
PROMISE: “When you wish to honor any particular saint and give Me thanks for all the graces I have bestowed on that saint, I increase grace in your soul through the merits of that saint. When you commit the end of your life to any of the saints by special prayers, I appoint those saints to be your advocates and to provide whatever you need at that hour.”-Our Lord to St. Gertrude
Blessed Anne Catherine Emmerich revealed in her Visions that saints are particularly powerful on their feast days and should be invoked then.