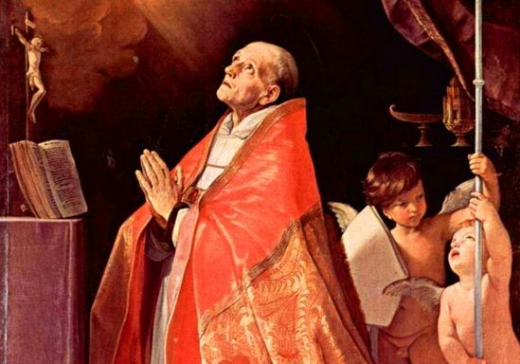 Patronage: Invoked against riots and civil disorder
.
Saint Andrew was born in Florence in 1301 of the illustrious Corsini family. A short time before the birth of Saint Andrew, his mother experienced a strange dream, in which she had given birth to a wolf which became a lamb upon entering a Carmelite church. After a dissolute youthful life Andrew repented, when one day in 1318 his desolate mother told him of her dream. He rose and went to the altar in the church where his parents had offered to God the child they hoped to obtain from His mercy; there he prayed to the Blessed Virgin with tears, then went to beg his admission to the Carmelite Order.
.
He began a life of great mortification. Ordained a priest in 1328, he studied in Paris and Avignon, and on his return became the Apostle of Florence, and Prior of his convent there. In 1360 he was consecrated Bishop of Fiesole, near Florence, and gained a great reputation as a peacemaker between rival political factions and for his love of the poor. He was also named papal nuncio to Bologna, where he pacified dissenting factions and won the hearts of the nobility with whom he was associating. He wrought many miracles of healing and conversion during his lifetime.
.
At the age of 71, while he was celebrating the midnight Mass of Christmas, the Blessed Virgin appeared to him and told him he would leave this world on the feast of the Epiphany, to meet the beloved Master he had served so faithfully. In effect, he died on that day in 1373, in the thirteenth year of his episcopacy. Miracles were so multiplied thereafter that Pope Eugenius IV permitted a public cult immediately. The city of Florence has always invoked him with confidence and happy results. He was canonized in 1629.
.
He is often represented holding his crosier, with a wolf and a lamb at his feet, or hovering over a battlefield on a cloud or a white steed — this in memory of his miraculous intervention in a battle the Florentine people won by his assistance.
.
Prayer to Venerate Any Saint

Saint Andrew Corsini: Feast Day February 4
.
Rev. 8:3-4 [3] And another angel came, and stood before the altar, having a golden censer; and there was given to him much incense, that he should offer of the prayers of all saints upon the golden altar, which is before the throne of God. [4] And the smoke of the incense of the prayers of the saints ascended up before God from the hand of the angel.
.
ETERNAL Father, I wish to honor St. (Name), and I give You thanks for all the graces You have bestowed upon him (her). I ask You to please increase grace in my soul through the merits of this saint, and I commit the end of my life to him (her) by this special prayer, so that by virtue of Your goodness and promise, St. (Name) might be my advocate and provide whatever is needed at that hour. Amen.
.
PROMISE: “When you wish to honor any particular saint and give Me thanks for all the graces I have bestowed on that saint, I increase grace in your soul through the merits of that saint. When you commit the end of your life to any of the saints by special prayers, I appoint those saints to be your advocates and to provide whatever you need at that hour.”-Our Lord to St. Gertrude
.
Blessed Anne Catherine Emmerich revealed in her Visions that saints are particularly powerful on their feast days and should be invoked then.