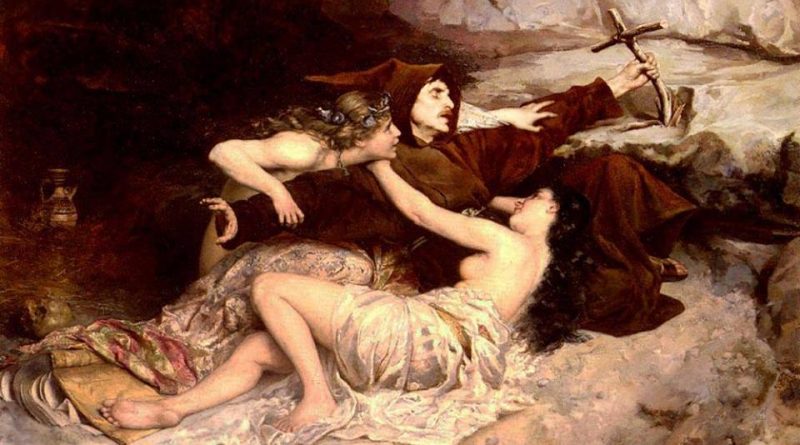 Patronage: against eczema, against epilepsy, against ergotism, against erysipelas, against pestilence, against Fire, against skin diseases, against skin rashes, amputees, anchorites, animals, basket makers, basket weavers, brush makers, butchers, cemetery workers, domestic animals, epileptics, farmers, grave diggers, grave yards, hermits, hogs, monks, pigs, relief from pestilences, wines, wineherds, Hospitallers, Canas, Brazil, Burgio, Sicily, Italy, Castro, filippo, Agrigento, Italy, Chiaravalle, Ancona, Italy, Fivizzano, Italy, Fontainemore, Italy, Sant’Angelo Lodigiano, Italy, Mook, Netherlands, San Antonio, Ibiza, Spain, Tempio-Ampurias, Italy.
.
Saint Anthony was born in the year 251, in Upper Egypt. Hearing at Mass the words, If you would be perfect, go, sell what you have and give to the poor, he gave away all his vast possessions — staying only to see that his sister’s education was completed — and retired into the desert. He then begged an aged hermit to teach him the spiritual life, and he also visited various solitaries, undertaking to copy the principal virtue of each.
.
To serve God more perfectly, Anthony immured himself in a ruin, building up the door so that none could enter. Here the devils assaulted him furiously, appearing as various monsters, and even wounding him severely; but his courage never failed, and he overcame them all by confidence in God and by the sign of the cross. One night, while Anthony was in his solitude, many devils scourged him so terribly that he lay as if dead. A friend found him in this condition, and believing him dead carried him home. But when Anthony came to himself he persuaded his friend to take him back, in spite of his wounds, to his solitude. Here, prostrate from weakness, he defied the devils, saying, I fear you not; you cannot separate me from the love of Christ. After more vain assaults the devils fled, and Christ appeared to Anthony in His glory.
.
Saint Anthony’s only food was bread and water, which he never tasted before sunset, and sometimes only once in two, three, or four days. He wore sackcloth and sheepskin, and he often knelt in prayer from sunset to sunrise.
.
His admirers became so many and so insistent that he was eventually persuaded to found two monasteries for them and to give them a rule of life. These were the first monasteries ever to be founded, and Saint Anthony is, therefore, the father of cenobites of monks. In 311 he went to Alexandria to take part in the Arian controversy and to comfort those who were being persecuted by Maximinus. This visit lasted for a few days only, after which he retired into a solitude even more remote so that he might cut himself off completely from his admirers. When he was over ninety, he was commanded by God in a vision to search the desert for Saint Paul the Hermit. He is said to have survived until the age of a hundred and five when he died peacefully in a cave on Mount Kolzim near the Red Sea. Saint Athanasius, his biographer, says that the mere knowledge of how Saint Anthony lived is a good guide to virtue.
.
Reflection. The more violent the assaults of temptation suffered by Saint Anthony, the more firmly did he grasp his weapons, namely, mortification and prayer. Let us imitate him in this if we wish to obtain victories like his.
.
Prayer to Venerate Any Saint
.
Saint Anthony of the Desert: Feast Day January 17
.
Rev. 8:3-4 And another angel came, and stood before the altar, having a golden censer; and there was given to him much incense, that he should offer of the prayers of all saints upon the golden altar, which is before the throne of God. And the smoke of the incense of the prayers of the saints ascended up before God from the hand of the angel.
.
ETERNAL Father, I wish to honor St. (Name), and I give Thee thanks for all the graces Thou have bestowed upon him (her). I ask Thee to please increase grace in my soul through the merits of this saint, and I commit the end of my life to him (her) by this special prayer, so that by virtue of Thy goodness and promise, St. (Name) might be my advocate and provide whatever is needed at that hour. Amen.
.
PROMISE: “When you wish to honor any particular saint and give Me thanks for all the graces I have bestowed on that saint, I increase grace in your soul through the merits of that saint. When you commit the end of your life to any of the saints by special prayers, I appoint those saints to be your advocates and to provide whatever you need at that hour.”-Our Lord to St. Gertrude
.
Blessed Anne Catherine Emmerich revealed in her Visions that saints are particularly powerful on their feast days and should be invoked then.