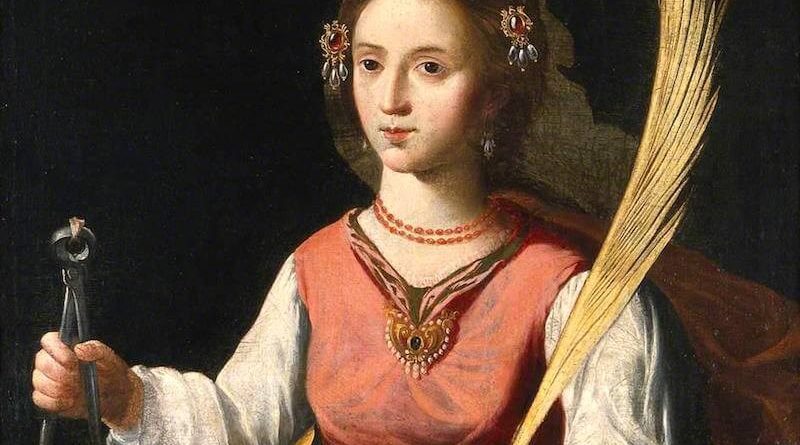 Patronage: Dentists, Tooth problems, Achterbos, Belgium, Ariccia, Italy, Cuccaro Monferrato, Italy
.
At Alexandria, in 249, a mob rose in savage fury against the Christians, during a persecution which the pagans of Alexandria instigated at the urging of a magician of that city. Metras, an old man, perished first. His eyes were pierced with reeds, and he was stoned to death. A woman named Quinta was the next victim. She was led to a heathen temple and told to worship; she replied by cursing the false god many times, and she too was stoned to death. After this the houses of the Christians were sacked and plundered; and they accepted the despoiling of their possessions with joy.
.
Saint Apollonia, an aged virgin, was the most famous among the martyrs, honored for her virtue and modesty. Her teeth were beaten out, and she was led outside the city, where a huge fire was kindled. She was told she must deny Christ, or else be burned alive. She was silent for a moment, and then, moved by a special inspiration of the Holy Ghost, she walked into the fire and died in its flames.
.
The same courage showed itself the next year, when Decius became emperor, and the persecution grew until it seemed as if the very elect must fall away. The story of the witness to Christianity given by a fifteen-year-old boy named Dioscorus illustrates both the courage of the Alexandrian Christians, and the esteem they had for the grace of martyrdom. To the arguments of the judge this young man returned wise answers, and then proved invincible under torture. His older companions were executed, but Dioscorus was spared on account of his tender years. The Christians could not suppose that he had been deprived of the martyr’s crown, unless to receive it afterwards more gloriously. Dioscorus, writes Dionysius, Bishop of Alexandria at this time, still is with us, reserved for some longer and greater combat.
.
There were indeed many Christians who came, pale and trembling, to offer the heathen sacrifices. But the judges themselves were struck with amazement at the multitudes who came spontaneously to receive the crown of martyrdom. Women triumphed over torture, until finally the judges were glad to execute them at once, and put an end to the ignominy of their own defeat.
.
Reflection. Many Saints who were not martyrs have longed to shed their blood for Christ. We, too, may pray to share some portion of their spirit. The slightest suffering for the faith, borne with humility and courage, is proof that Christ has heard our prayer.
.
Prayer to Venerate Any Saint
.
Saint Apollonia: Feast Day February 9
.
Rev. 8:3-4 [3] And another angel came, and stood before the altar, having a golden censer; and there was given to him much incense, that he should offer of the prayers of all saints upon the golden altar, which is before the throne of God. [4] And the smoke of the incense of the prayers of the saints ascended up before God from the hand of the angel.
.
ETERNAL Father, I wish to honor St. (Name), and I give You thanks for all the graces You have bestowed upon him (her). I ask You to please increase grace in my soul through the merits of this saint, and I commit the end of my life to him (her) by this special prayer, so that by virtue of Your goodness and promise, St. (Name) might be my advocate and provide whatever is needed at that hour. Amen.
.
PROMISE: “When you wish to honor any particular saint and give Me thanks for all the graces I have bestowed on that saint, I increase grace in your soul through the merits of that saint. When you commit the end of your life to any of the saints by special prayers, I appoint those saints to be your advocates and to provide whatever you need at that hour.”-Our Lord to St. Gertrude
.
Blessed Anne Catherine Emmerich revealed in her Visions that saints are particularly powerful on their feast days and should be invoked then.