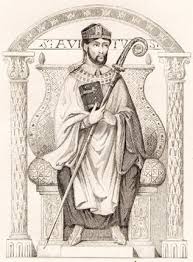 Saint Avitus was the child of a poor family of Orleans, France. From his youth he desired to consecrate himself to God, and he received the monastic habit at the abbey of Micy or Saint-Maximin in the diocese of Orleans, at that time still very small. Its first Superior, Saint Maximin, remarked the young monk’s virtue when he observed that he deprived himself of a great portion of his food each day in order to nourish the poor.
.
After serving as steward for the monastery, Saint Avitus decided to leave in secret to go and live in solitude in a deserted place. Saint Maximin recognized in this flight a secret design of God and made no attempt to have him return. But when the holy Abbot died, Saint Avitus was chosen to succeed him by the unanimous consent of the religious. He was brought back despite his protestations of unworthiness, and was obliged to receive the episcopal consecration and his investiture from the bishop of Orleans.
.
He labored at his new duties with great assiduity, but saw with sorrow that the religious were becoming lax. He again thought of flight, considering himself the cause of the difficulties, and did indeed find a solitude in the diocese of Chartres, far from all village life, where he lived several years on fruits growing wild in the forest.
.
One day a poor mute herdsman lost a pig in the forest, and when a severe storm broke out, lost his way until he saw a light in the distance. When he approached, he found himself facing the Saint. The latter not only lit his torch again for him and showed him the way to go, but made the sign of the cross on his mouth and restored to him the use of speech, which he had not had for long years. When this miracle was divulged, the hermit became known everywhere in the region, and the desert was soon transformed, as it were, into a city. The monastery which Saint Avitus built there and governed later bore his name.
.
He left it from time to time to go to the city of Orleans for his works of mercy; his prayers cured many sick and handicapped persons. When he failed to persuade the cruel king Clodomir to liberate Saint Sigismond, king of Burgundy, with his wife and children whom he had captured and held prisoner and was intending to put to death, Saint Avitus told him that if he committed that crime, he himself would perish miserably in the first battle he would undertake. This indeed is what occurred.
.
Saint Avitus one day resurrected one of his brethren who had died during his absence; all the monks saw the dead religious rise from his coffin and begin to sing with the others the infinite mercies of Our Lord. Saint Lubin or Leobin, bishop of Chartres, assured his people in a sermon that he had learned of this fact from the very monk who had been resurrected.
.
Three famous religious, one of them the same Saint Leobin, who at that time was a simple monk, attended our Saint at his blessed death, which happened about the year 530. His body was carried to the church of Saint George in Orleans and interred there with great pomp. Afterwards king Childebert built a magnificent temple over this tomb, out of gratitude for the prayers of Saint Avitus.
.
Prayer to Venerate Any Saint
.
Saint Avitus: Feast Day June 17
.
I desire therefore, first of all, that supplications, prayers, intercessions, and thanksgivings be made for all men: For kings, and for all that are in high station: that we may lead a quiet and a peaceable life in all piety and chastity. For this is good and acceptable in the sight of God our Saviour, Who will have all men to be saved, and to come to the knowledge of the truth. (1 Timothy 2:1-4)
.
And another angel came, and stood before the altar, having a golden censer; and there was given to him much incense, that he should offer of the prayers of all saints upon the golden altar, which is before the throne of God. And the smoke of the incense of the prayers of the saints ascended up before God from the hand of the angel. (Rev. 8:3-4)
.
ETERNAL Father, I wish to honor St. (Name), and I give You thanks for all the graces You have bestowed upon him (her). I ask You to please increase grace in my soul through the merits of this saint, and I commit the end of my life to him (her) by this special prayer, so that by virtue of Your goodness and promise, St. (Name) might be my advocate and provide whatever is needed at that hour. Amen.
.
PROMISE: “When you wish to honor any particular saint and give Me thanks for all the graces I have bestowed on that saint, I increase grace in your soul through the merits of that saint. When you commit the end of your life to any of the saints by special prayers, I appoint those saints to be your advocates and to provide whatever you need at that hour.”-Our Lord to St. Gertrude
.
Blessed Anne Catherine Emmerich revealed in her Visions that saints are particularly powerful on their feast days and should be invoked then