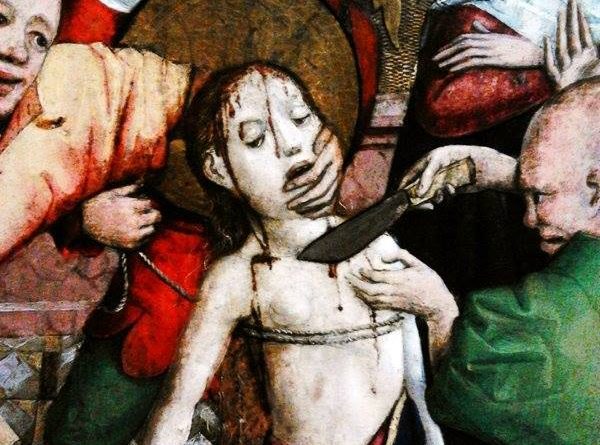 Patroness of: artillerymen, fireworks manufacturers, firemen, stone masons, against sudden death, against fires, and against storms (especially lightning storms)
.
Saint Barbara was brought up by a pagan father, Dioscorus. With the intention of protecting her beauty, he kept her jealously secluded in a lonely but very luxurious tower which he built for that purpose; for in his own way he loved her. In her forced solitude, this very gifted young girl undertook to study religion, and soon saw clearly all the vices and absurdities of paganism; her clear mind realized that there could be only one supreme Creator-God, and that He is entitled to the worship of His reasonable creatures. Divine Providence by its wonderful ways contrived to obtain for her the means to send a message to Origen, the famous exegete, asking for knowledge of the Christian faith. That teacher of Alexandria immediately sent to her, at Nicomedia, a disciple named Valentinian. Soon she was baptized, and Our Lord appeared to her, as He would appear to others such as Saint Catherine of Alexandria and Saint Teresa of Avila, to tell her He had chosen her to be His spouse. Saint Barbara, rejoicing, hoped to be able to communicate her precious new faith to her father, but would soon discover that hope was vain.
.
When she was of an age to marry, many requests for her hand came to her wealthy father. She was his only heiress, and he rejected her expressed wish not to accept any such offer, although she said she wished to remain his consolation for his declining years. When she continued to refuse every suitor’s demands, and when Dioscorus returned from a journey to find all the idols he had placed in her tower broken in pieces and scattered about, he was furious. Discovering his daughter’s conversion, he was beside himself with rage. She escaped and dwelt for a time in a cavern, where she was concealed by the vegetation growing at the entrance. But finally her father’s threats of chastisement, which he made known during his searches, for anyone who might be concealing her, caused some local shepherds who knew of her whereabouts, to reveal her retreat.
.
Her father denounced her to the civil tribunal, and Barbara was horribly tortured twice, and finally beheaded. Her own father, merciless to the last, asked to deal her the fatal blow himself. God, however, speedily punished her persecutors. While her soul was being borne by the Angels to Paradise, a flash of lightning struck Dioscorus and Marcian, the civil prefect, and both were summoned in haste to the judgment-seat of God.
.
Saint Barbara is beloved of the Spanish-speaking peoples. She is the special protectress of the region of Metz in France, where a magnificent church, later destroyed, was built in her honor in the 1500’s. She is invoked against sudden and unprovided death, and invariably answers all requests for the favor of receiving the Last Sacraments. A famous instance of her intervention on behalf of a Saint who was on the verge of death, can be read in the life of Saint Stanislaus Kostka.
.
Reflection: Pray often to be protected from a sudden and unprovided death; and, above all, that you may be strengthened by the Holy Viaticum against the dangers of your final hour.
.
Prayer to Venerate Any Saint
.
Saint Barbara: Feast Day December 4
.
Rev. 8:3-4 [3] And another angel came, and stood before the altar, having a golden censer; and there was given to him much incense, that he should offer of the prayers of all saints upon the golden altar, which is before the throne of God. [4] And the smoke of the incense of the prayers of the saints ascended up before God from the hand of the angel.
.
ETERNAL Father, I wish to honor St. (Name), and I give You thanks for all the graces You have bestowed upon him (her). I ask You to please increase grace in my soul through the merits of this saint, and I commit the end of my life to him (her) by this special prayer, so that by virtue of Your goodness and promise, St. (Name) might be my advocate and provide whatever is needed at that hour. Amen.
.
PROMISE: “When you wish to honor any particular saint and give Me thanks for all the graces I have bestowed on that saint, I increase grace in your soul through the merits of that saint. When you commit the end of your life to any of the saints by special prayers, I appoint those saints to be your advocates and to provide whatever you need at that hour.”-Our Lord to St. Gertrude
.
Blessed Anne Catherine Emmerich revealed in her Visions that saints are particularly powerful on their feast days and should be invoked then