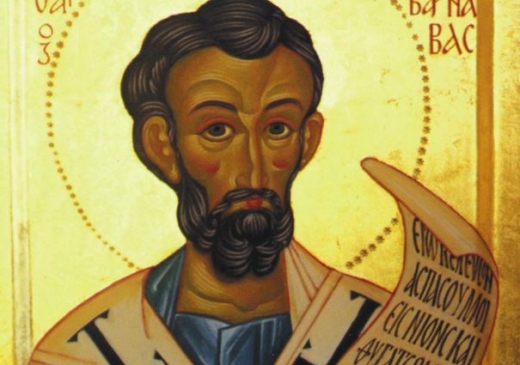 Patronage: Cyprus, Antioch, against hailstorms, invoked as peacemaker
.
We read that in the first days of the Church, the multitude of believers had but one heart and one soul; and none said that anything which he possessed was his own.(Acts 4:32) Amid this fervent company of Christians who practiced evangelical poverty, one only is singled out by name, Joseph, a rich Levite from Cyprus. He, having land, sold it, and bringing the price, laid it at the feet of the Apostles.They then gave him a new name, Barnabas, son of consolation. He was a good man, full of the Holy Spirit and of faith, and was soon chosen for an important mission, the rapidly growing Church of Antioch. Here he perceived the great work which was waiting to be done among the Greeks, and therefore he hastened to seek out and bring Saint Paul to Antioch, from his retirement at Tarsus.
.
When the prophet Agabus at Antioch foretold a great universal famine, Barnabas and Paul were selected by the faithful, to take to the Church of Jerusalem their generous offerings for the poor of that city. It was also at Antioch that the two Saints were named for the apostolate of the Gentiles; and they sailed together for Cyprus and then to the cities of Asia Minor. Their preaching struck men with amazement, and some cried out, The gods have come down to us in the likeness of men! calling Paul Mercury, and Barnabas Jupiter. The Saints traveled together once again, to the Council of Jerusalem, and told of the signs and wonders which God had wrought among the Gentiles during their missionary journey. Shortly after this they separated; Barnabas with John Mark went to Cyprus, while Paul with Silas returned to Asia Minor.
.
The tradition of Milan, Italy, reveals that Saint Barnabas went from Cyprus to Italy, and in Milan founded its church; he is still honored there as its first bishop. After seven years he consecrated Saint Anathalon to replace him, and returned to Cyprus to visit the churches. He crisscrossed the island several times to bring to every city and village the Holy Name of the Son of God. In Salamis, some of the recalcitrants plotted together to kill him. He was aware of the conspiracy; nonetheless, after foretelling to John Mark that he would die that same day, he went to the synagogue to preach as usual. It was there that he was stoned as a blasphemer, in the year 61 of our era. Saint John Mark succeeded in burying him near Salamis.
.

Prayer to Venerate Any Saint
.
Saint Barnabas Apostle: Feast Day June 11
.
I desire therefore, first of all, that supplications, prayers, intercessions, and thanksgivings be made for all men: For kings, and for all that are in high station: that we may lead a quiet and a peaceable life in all piety and chastity. For this is good and acceptable in the sight of God our Saviour, Who will have all men to be saved, and to come to the knowledge of the truth. (1 Timothy 2:1-4)
.
And another angel came, and stood before the altar, having a golden censer; and there was given to him much incense, that he should offer of the prayers of all saints upon the golden altar, which is before the throne of God. And the smoke of the incense of the prayers of the saints ascended up before God from the hand of the angel. (Rev. 8:3-4)
.
ETERNAL Father, I wish to honor St. (Name), and I give Thee thanks for all the graces Thou have bestowed upon him (her). I ask Thee to please increase grace in my soul through the merits of this saint, and I commit the end of my life to him (her) by this special prayer, so that by virtue of Thy goodness and promise, St. (Name) might be my advocate and provide whatever is needed at that hour. Amen.
.
PROMISE: “When you wish to honor any particular saint and give Me thanks for all the graces I have bestowed on that saint, I increase grace in your soul through the merits of that saint. When you commit the end of your life to any of the saints by special prayers, I appoint those saints to be your advocates and to provide whatever you need at that hour.”-Our Lord to St. Gertrude
.
Blessed Anne Catherine Emmerich revealed in her Visions that saints are particularly powerful on their feast days and should be invoked then