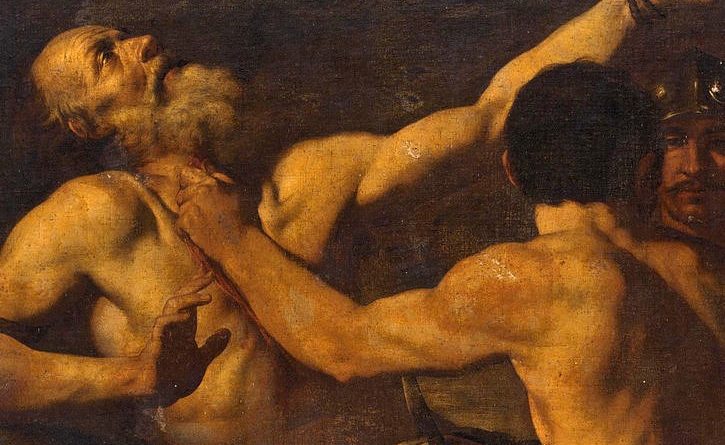 Patronage:Armenia; bookbinders; butchers; Florentine cheese and salt merchants; Gambatesa,Italy; Catbalogan,Samar; Għargħur, Malta; leather workers; neurological diseases;plasterers; shoemakers; curriers; tanners; trappers; twitching; whiteners ; Los Cerricos (Spain)
.
Saint Bartholomew, Bar-Tolmai or son of Tolmai, was one of the twelve Apostles called to the apostolate by our Blessed Lord Himself. His name is more adequately rendered by his given name,Nathanael. If one wonders why the synoptic Gospels always call him Bartholomew, it would be because the name Nathanael in Hebrew is equivalent to that of Matthew, since both in Hebrew signify gift of God; in this way the Evangelists avoided all confusion between the two Apostles. He was a native of Cana in Galilee, a doctor of the Jewish law, and a friend of Philip.
.
Philip, advised by Peter and Andrew, hastened to communicate to his friend the good news of his discovery of Christ: We have found Him whom Moses in the Law, and the Prophets, wrote! Come and see. Jesus saw Nathanael coming to Him, and said of him, Behold a true Israelite, in whom there is no guile. (Cf. John 1:45-49) His innocence and simplicity of heart deserved to be celebrated with this high praise in the divine mouth of Our Redeemer. And Nathanael, when Jesus told him He had already seen him in a certain place, confessed his faith at once: Rabbi, Thou art the Son of God, Thou art the King of Israel!
.
Being eminently qualified by divine grace to discharge the functions of an Apostle, he carried the Gospel through the most barbarous countries of the East, penetrating into the remoter Indies, baptizing neophytes and casting out demons. A copy of the Gospel of Saint Matthew was found in India by Saint Pantænus in the third century, taken there, according to local tradition, by Saint Bartholomew. Saint John Chrysostom said the Apostle also preached in Asia Minor and, with Saint Philip, suffered there, though not mortally, for the faith. Saint Bartholomew’s last mission was in Greater Armenia, where, preaching in a place obstinately addicted to the worship of idols, he was crowned with a glorious martyrdom. The modern Greek historians say that he was condemned by the governor of Albanopolis to be crucified. Others affirm that he was flayed alive, which treatment might well have accompanied his crucifixion, this double punishment being in use not only in Egypt, but also among the Persians.
.
Reflection: The characteristic virtue of the Holy Apostles was zeal for the divine glory. A soldier is always ready to defend the honor of his prince, and a son that of his father; can a Christian say he loves God if he is indifferent to His honor?
.
Prayer to Venerate Any Saint
.
Saint Bartholomew: Feast Day August 24
.
I desire therefore, first of all, that supplications, prayers, intercessions, and thanksgivings be made for all men: For kings, and for all that are in high station: that we may lead a quiet and a peaceable life in all piety and chastity. For this is good and acceptable in the sight of God our Saviour, Who will have all men to be saved, and to come to the knowledge of the truth. (1 Timothy 2:1-4)
.
And another angel came, and stood before the altar, having a golden censer; and there was given to him much incense, that he should offer of the prayers of all saints upon the golden altar, which is before the throne of God. And the smoke of the incense of the prayers of the saints ascended up before God from the hand of the angel. (Rev. 8:3-4)
.
ETERNAL Father, I wish to honor St. (Name), and I give Thee thanks for all the graces Thou has bestowed upon him (her). I ask Thee to please increase grace in my soul through the merits of this saint, and I commit the end of my life to him (her) by this special prayer, so that by virtue of Thy goodness and promise, St. (Name) might be my advocate and provide whatever is needed at that hour. Amen.
.
PROMISE: “When you wish to honor any particular saint and give Me thanks for all the graces I have bestowed on that saint, I increase grace in your soul through the merits of that saint. When you commit the end of your life to any of the saints by special prayers, I appoint those saints to be your advocates and to provide whatever you need at that hour.”-Our Lord to St. Gertrude
.
Blessed Anne Catherine Emmerich revealed in her Visions that saints are particularly powerful on their feast days and should be invoked then.