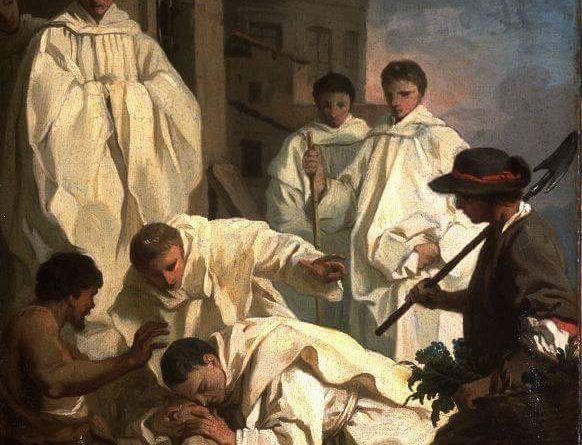 Being upon a day gone out with his monks to work in the field, a country man carrying the corpse of his dead son came to the gate of the Abbey, lamenting the loss of his child: and inquiring for holy Benedict, they told him that he was abroad with his monks in the field. Down at the gate he laid the dead body, and with great sorrow of soul ran in haste to seek out the venerable father. At the |93 same time, the man of God was returning homeward from work with his monks: whom so soon as he saw, he [the country man] began to cry out: “Give me my son, give me my son!”
.
The man of God, amazed at these words, stood still, and said: “What, have I taken away your son?” “No, no,” quoth the sorrowful father, ” but he is dead: come for Christ Jesus’ sake and restore him to life.”
.
The servant of God, hearing him speak in that manner, and seeing his monks upon compassion to solicit the poor man’s suit, with great sorrow of mind he said: “Away, my good brethren, away: such miracles are not for us to work, but for the blessed Apostles: why will you lay such a burthen upon me, as my weakness cannot bear?” But the poor man, whom excessive grief enforced, would not give over his petition, but swore that he would never depart, except he did raise up his son.
.
“Where is he, then?” quoth God’s servant.
.
He answered that his body lay at the gate of the Abbey: to which place when the man of God came with his monks, he kneeled down and lay upon the body of the little child, and rising, he held up his hands towards heaven, and said: “Behold not, O Lord, my sins, but the faith of this man, that desireth to have his son raised to life, and restore that soul to the body, which thou hast taken away.”
.
He had scarce spoken these words, and behold the soul returned back again, and therewith the child’s body began to tremble in such sort that all which were present did behold it in strange manner to pant and shake. Then he took it by the hand and gave it to his father, but alive and in health. Certain it is that this miracle was not in his own power, so he prostrated upon the ground and prayed so earnestly.