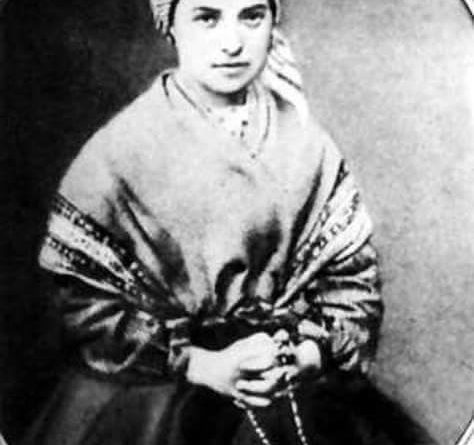 Patronage: against bodily ills, against illness, against poverty, against sickness, Lourdes, France, people ridiculed for their piety, poor people, shepherdesses, shepherds, sick people.
.
Saint Bernadette Soubirous was born at Lourdes, in the Pyrenees mountains, in 1844. This young girl, fragile of health, born of a very poor but pious family, at fourteen years of age witnessed eighteen apparitions of Our Blessed Lady at Lourdes, from February 11, 1858 to July 16th of the same year. She was instructed to make known the healing powers which the Blessed Virgin, by Her presence, would give to the miraculous spring of Lourdes. A worker who had lost an eye in an explosion recovered his sight when he washed his face in this water; a dying child was plunged into the small basin which had formed around the spring, and the next day began to walk. The police attempted to stop the crowds from going to the Grotto for the foretold apparitions, but were unable to do so. On March 25th, the Beautiful Lady identified Herself in response to Bernadette’s request: I am the Immaculate Conception.
.
Bernadette was accused of having hallucinations, of spells of mental illness, of lying, but her great simplicity eventually made evident her innocence and entire sanity. Through the benevolent understanding and collaboration of the bishop of nearby Tarbes, Bishop Laurence, who later authorized the cult of Our Lady of Lourdes, a chapel and then a beautiful basilica were raised above the grotto of the apparitions, on the banks of the Gave River, now a world-famous pilgrimage site.
.
In 1866 Saint Bernadette joined the Sisters of Charity at Nevers, taking her perpetual vows in 1878. She died in 1879 at the age of 36, after long and painful sufferings which she bore very willingly, even with joy. When one of the Mothers said to her: We will pray that God may relieve your pain, she answered, No! Don’t pray for relief for me, only for patience. The last words she wrote in her little spiritual notebook were: The more I am crucified, the more I rejoice. She was beatified by Pope Pius XI in 1925, canonized by him in 1933.
.
Prayer to Venerate Any Saint
.
Saint Bernadette Soubirous: Feast Day February 18
.
Rev. 8:3-4 [3] And another angel came, and stood before the altar, having a golden censer; and there was given to him much incense, that he should offer of the prayers of all saints upon the golden altar, which is before the throne of God. [4] And the smoke of the incense of the prayers of the saints ascended up before God from the hand of the angel.
.
ETERNAL Father, I wish to honor St. (Name), and I give You thanks for all the graces You have bestowed upon him (her). I ask You to please increase grace in my soul through the merits of this saint, and I commit the end of my life to him (her) by this special prayer, so that by virtue of Your goodness and promise, St. (Name) might be my advocate and provide whatever is needed at that hour. Amen.
.
PROMISE: “When you wish to honor any particular saint and give Me thanks for all the graces I have bestowed on that saint, I increase grace in your soul through the merits of that saint. When you commit the end of your life to any of the saints by special prayers, I appoint those saints to be your advocates and to provide whatever you need at that hour.”-Our Lord to St. Gertrude
.
Blessed Anne Catherine Emmerich revealed in her Visions that saints are particularly powerful on their feast days and should be invoked then.