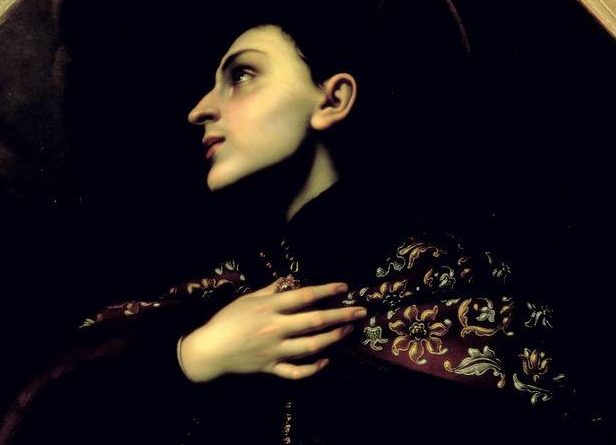 Patronage: Lithuania (1636), Lithuanian youth (1948)
.
Casimir, the second son of Casimir III, King of Poland, was born in 1458. From the custody of a very virtuous mother, Elizabeth of Austria, he passed to the guardianship of a devoted master, the learned and pious John Dugloss. Thus animated from his earliest years by precept and example, his innocence and piety soon ripened into the practice of heroic virtue.
.
In an atmosphere of luxury and magnificence the young prince fasted, wore a hair shirt, slept upon the bare earth, prayed by night, and watched for the opening of the church doors at dawn. He became so tenderly devoted to the Passion of Our Lord that at Mass he seemed quite rapt out of himself; his charity to the poor and afflicted knew no bounds. His love for our Blessed Lady he expressed in a long and beautiful hymn, familiar to us in English as Daily, Daily, Sing to Mary. At the age of twenty-five, sick with a long illness, he foretold the hour of his death, and chose to die a virgin rather than accept the life and health which the physicians held out to him in the married state.
.
The miracles wrought by his body after death fill an entire volume. The blind saw, the lame walked, the sick were healed, a dead girl was raised to life. At one time the Saint in glory, seen in the air by his army, led his Catholic countrymen to battle and delivered them by a wondrous victory from the schismatic Russian hosts.
.
One hundred and twenty-two years after his death Saint Casimir’s tomb in the cathedral church of Vilna was opened, that the holy remains might be transferred to the rich marble chapel where it now lies. The place was damp, and the very vault crumbled away in the hands of the workmen; yet the Saint’s body, wrapped in robes of silk, still intact, was found whole and incorrupt, and emitting a sweet fragrance which filled the church and refreshed all who were present. Under his head was found his hymn to Our Lady, which he had had buried with him.
.
Reflection. May the meditation of Saint Casimir’s life make us increase in devotion to the most pure Mother of God — a sure means of preserving holy purity in our own soul.
.
Prayer to Venerate Any Saint
.
Saint Casimir : Feast Day March 4
.
Rev. 8:3-4 [3] And another angel came, and stood before the altar, having a golden censer; and there was given to him much incense, that he should offer of the prayers of all saints upon the golden altar, which is before the throne of God. [4] And the smoke of the incense of the prayers of the saints ascended up before God from the hand of the angel.
.
ETERNAL Father, I wish to honor St. (Name), and I give You thanks for all the graces You have bestowed upon him (her). I ask You to please increase grace in my soul through the merits of this saint, and I commit the end of my life to him (her) by this special prayer, so that by virtue of Your goodness and promise, St. (Name) might be my advocate and provide whatever is needed at that hour. Amen.
.
PROMISE: “When you wish to honor any particular saint and give Me thanks for all the graces I have bestowed on that saint, I increase grace in your soul through the merits of that saint. When you commit the end of your life to any of the saints by special prayers, I appoint those saints to be your advocates and to provide whatever you need at that hour.”-Our Lord to St. Gertrude
.
Blessed Anne Catherine Emmerich revealed in her Visions that saints are particularly powerful on their feast days and should be invoked then.