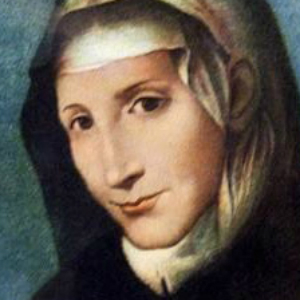 Patronage: Brides, Childless People, Difficult Marriages, People Ridiculed For Their Piety, Temptations, Victims Of Adultery, Victims Of Unfaithfulness, Widows
Saint Catherine Fieschi, daughter of a Viceroy of Naples, was born in Genoa. Her family, rich in great men, had given to the Church two popes, nine cardinals and two archbishops. Catherine, noble in birth, rich, and exceedingly beautiful, had as a child rejected the solicitations of the world, and begged her divine Master for some share in His sufferings. Despite her ardent desire to enter the cloister, at sixteen years of age she found herself promised in marriage to a young nobleman of dissolute habits. She was obliged to obey her parents’ intentions. Her spouse treated her with such harshness that after five years, wearied by his cruelty, she somewhat relaxed the strictness of her state and entered into the worldly society of Genoa. At length, enlightened by divine grace as to the danger of her state, she resolutely broke with the world and entered upon a life of rigorous penance and prayer. Having seen Jesus with His cross, and heard His reproaches, O love! she cried, I will sin no longer!
For twenty-three years she could take no nourishment but Holy Communion, and she drank only a little water mingled with vinegar and salt. Every day she prayed for six to seven hours on her knees, and never relaxed this practice. Her heroic fortitude was sustained by the constant thought of the holy souls of purgatory, whose sufferings were revealed to her, and whose state she has described in a treatise full of heavenly wisdom.
The charity with which she devoted herself to the service of the hospitals, undertaking the most disagreeable offices with joy, caused the administrators of the large hospital of Genoa to confide it entirely to her government. She served there without any remuneration whatsoever. Her examples also induced her husband to practice patience and amend his ways; before he died he joined the Third Order of Saint Francis and faithfully followed its penitential exercises. A long, grievous and mysterious illness during the last nine years of her own life served to perfect her union with God. The most able physicians could not help Saint Catherine, and judged that her illness was not from natural causes. Her first biographer wrote an account in detail of her last month on earth, and assures the Church that she left this mortal life in a state of total purification. She died on the Feast of the Exaltation of the Holy Cross, September 14, 1510.
Reflection: The constant thought of purgatory will help us not only to escape its dreadful pains, but also to avoid the least imperfection which hinders our approach to God.
Prayer to Venerate Any Saint
Saint Catherine of Genoa : Feast Day September 15
Rev. 8:3-4 [3] And another angel came, and stood before the altar, having a golden censer; and there was given to him much incense, that he should offer of the prayers of all saints upon the golden altar, which is before the throne of God. [4] And the smoke of the incense of the prayers of the saints ascended up before God from the hand of the angel.
ETERNAL Father, I wish to honor St. (Name), and I give You thanks for all the graces You have bestowed upon him (her). I ask You to please increase grace in my soul through the merits of this saint, and I commit the end of my life to him (her) by this special prayer, so that by virtue of Your goodness and promise, St. (Name) might be my advocate and provide whatever is needed at that hour. Amen.
PROMISE: “When you wish to honor any particular saint and give Me thanks for all the graces I have bestowed on that saint, I increase grace in your soul through the merits of that saint. When you commit the end of your life to any of the saints by special prayers, I appoint those saints to be your advocates and to provide whatever you need at that hour.”-Our Lord to St. Gertrude
Blessed Anne Catherine Emmerich revealed in her Visions that saints are particularly powerful on their feast days and should be invoked then.