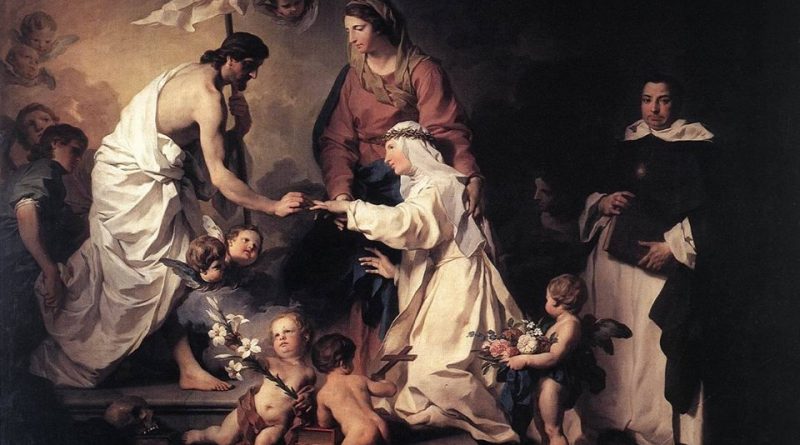 On Easter Sunday 1541, Saint Catherine of Ricci prayed to the Lord to give her a new heart, because she said “With this weak heart of mine, I cannot love you properly.” Then, on the Feast of Corpus Christi she went into ecstasy, and Our Lord appeared to Catherine and gave her a new heart made of flesh. She said that her heart felt as if it was on fire. She had asked to love Him with a heart that could love Him as He deserved. Whose heart could better love Him than that of Mother Mary which is the Heart our Lord gave to her! Who knew how to truly love her Son, if not His Mother? Our Lord, when she asked for a new heart that could properly love Him, gave her the heart of His Mother Mary. From that time on, she said her heart was no longer hers, but that of Jesus, Mother.
.
The following year, the 15th of April, 1542, Saint Catherine de Ricci was mystically married to Jesus. Though many Saints have been given that special blessing by the Lord such as St. Catherine of Siena, St. Gemma Galgani, St. Veronica Giuliani to mention just a few Saint Catherine of Ricci outward sign of this marriage was what made it unusual to the others. Our Lord appeared to the young girl in a brilliance, reminiscent of the Transfiguration. He took her hand in His and kissed it; then He took a gleaming ring off His own finger and placed it on the ring finger on her left hand, saying,
.
“My daughter, receive this ring as pledge and proof that thou dost now, and ever shalt, belong to Me.”
.
While this has happened before to many Saints. The difference with this Mystical Marriage was that there were witnesses to this miracle! The ring actually manifested itself in a physical ring of gold and diamonds. That’s how Saint Catherine de Ricci saw it all her life.