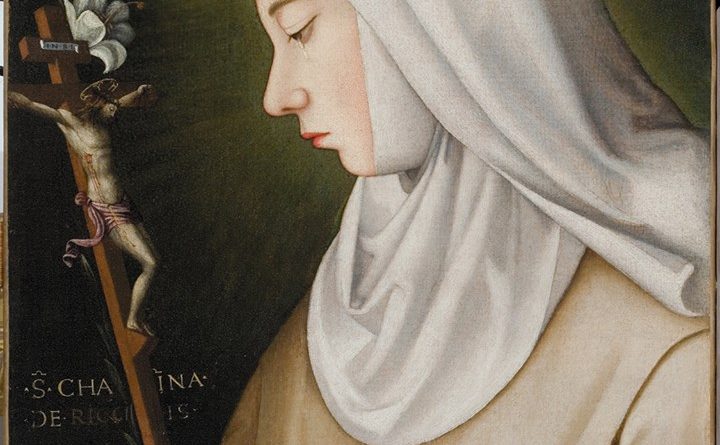 Patronage: against illness, sick people, pipe makers, tobacconists, Prato, Italy
.
Alexandrina of Ricci was the daughter of a noble Florentine. At the age of thirteen she entered the Third Order of Saint Dominic in the monastery of Prato, taking in religion the name of Catherine, in honor of her patron and predecessor of Siena. Her special attraction was to the Passion of Christ, in which she was permitted miraculously to participate. During the Lent of 1541, being then twenty-one years of age, she had a vision of the crucifixion so heartrending that she was prostrated and confined to bed for three weeks, and was only restored on Holy Saturday, by an apparition of Saint Mary Magdalene and the risen Jesus.
.
During twelve years Saint Catherine passed every Friday in ecstasy. She received the sacred stigmata, the wound in the left side, and the crown of thorns. All these favors gave her continual and intense suffering, and inspired her with a loving sympathy for the yet more bitter tortures of the Holy Souls. In their behalf she offered all her prayers and penances; and her charity toward them became so famous throughout Tuscany that after every death the friends of the deceased hastened to Catherine to secure her prayers.
.
Saint Catherine offered many prayers, fasts, and penances for a certain great man, and thereby obtained his salvation. It was revealed to her that he was nonetheless in purgatory; and such was her love of Jesus crucified that she offered to suffer all the pains which would be inflicted on that soul. Her prayer was granted. The soul entered heaven, and for forty days Catherine suffered indescribable agonies. Her body was covered with blisters, emitting heat so great that her cell seemed on fire. Her flesh appeared as if roasted, and her tongue like red-hot iron. She remained calm and joyful, saying, I long to suffer all imaginable pains, that souls may quickly see and praise their Redeemer. She conversed with the Saints in glory, and frequently with Saint Philip Neri at Rome without ever leaving her convent at Prato. She died, amid angels’ songs, in 1590.
.
Reflection: If we truly love Jesus crucified, we must like Saint Catherine, long to release the Holy Souls whom He has redeemed but has left to our charity to set free.
.
Prayer to Venerate Any Saint
.
Saint Catherine of Ricci: Feast Day February 13
.
Rev. 8:3-4 [3] And another angel came, and stood before the altar, having a golden censer; and there was given to him much incense, that he should offer of the prayers of all saints upon the golden altar, which is before the throne of God. [4] And the smoke of the incense of the prayers of the saints ascended up before God from the hand of the angel.
.
ETERNAL Father, I wish to honor St. (Name), and I give You thanks for all the graces You have bestowed upon him (her). I ask You to please increase grace in my soul through the merits of this saint, and I commit the end of my life to him (her) by this special prayer, so that by virtue of Your goodness and promise, St. (Name) might be my advocate and provide whatever is needed at that hour. Amen.
.
PROMISE: “When you wish to honor any particular saint and give Me thanks for all the graces I have bestowed on that saint, I increase grace in your soul through the merits of that saint. When you commit the end of your life to any of the saints by special prayers, I appoint those saints to be your advocates and to provide whatever you need at that hour.”-Our Lord to St. Gertrude
.
Blessed Anne Catherine Emmerich revealed in her Visions that saints are particularly powerful on their feast days and should be invoked then.