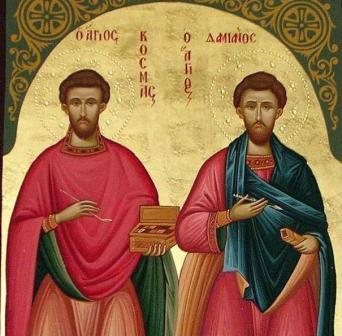 Saints Cosmas and Damian were brothers, born in Arabia in the third century, of noble and virtuous parents. Saint Gregory of Tours wrote that they were twins. They studied the sciences in Syria, and became eminent for their skill in medicine. Being Christians and filled with the charity which characterizes our holy religion, they practiced their profession with great application and wonderful success, but never accepted any fee. They were loved and respected by the people for their good offices and their zeal for the Christian faith, which they took every opportunity to propagate.
.
When the persecution of Diocletian began to rage, it was impossible for persons of such distinction to remain concealed. They were denounced to the governor of Cilicia, named Lysias, as Christians who cured various illnesses and delivered possessed persons in the name of the one called Christ; they do not permit others to go to the temple to honor the gods by sacrifices. The two brothers were apprehended by the order of the governor, and after various preliminary torments were sentenced to be bound hand and foot and thrown into the sea. Their prayer has been conserved: We rejoice, Lord, to follow the path of Your commandments, as in the midst of immense riches; and even though we walk through the valley of the shadow of death, we fear no evil. And they recited the 23rd Psalm. The sentence was accomplished, but an Angel untied their bonds and drew them out of the sea. The witnesses of this fact returned to announce to the governor what had happened. They were brought back to Lysias as magicians, and he decided to imprison them until he could decide upon their fate.
.
He condemned them to be burnt alive, but they prayed to God to manifest His power, lest His name be blasphemed, and an earthquake moved the fire into the midst of the pagans and spared the martyrs. When the rack also left them unharmed, the prefect swore by his gods he would continue to torture them until they became the food of birds of prey. They were crucified and stoned by the people, but this and still other tortures were ineffectual. They were finally beheaded with three Christian companions.
.
Prayer to Venerate Any Saint
.
Saint Cosmas and Saint Damian Martyrs: Feast Day September 27
.
Rev. 8:3-4 [3] And another angel came, and stood before the altar, having a golden censer; and there was given to him much incense, that he should offer of the prayers of all saints upon the golden altar, which is before the throne of God. [4] And the smoke of the incense of the prayers of the saints ascended up before God from the hand of the angel.
.
ETERNAL Father, I wish to honor St. (Name), and I give You thanks for all the graces You have bestowed upon him (her). I ask You to please increase grace in my soul through the merits of this saint, and I commit the end of my life to him (her) by this special prayer, so that by virtue of Your goodness and promise, St. (Name) might be my advocate and provide whatever is needed at that hour. Amen.
.
PROMISE: “When you wish to honor any particular saint and give Me thanks for all the graces I have bestowed on that saint, I increase grace in your soul through the merits of that saint. When you commit the end of your life to any of the saints by special prayers, I appoint those saints to be your advocates and to provide whatever you need at that hour.”-Our Lord to St. Gertrude
.
Blessed Anne Catherine Emmerich revealed in her Visions that saints are particularly powerful on their feast days and should be invoked then.