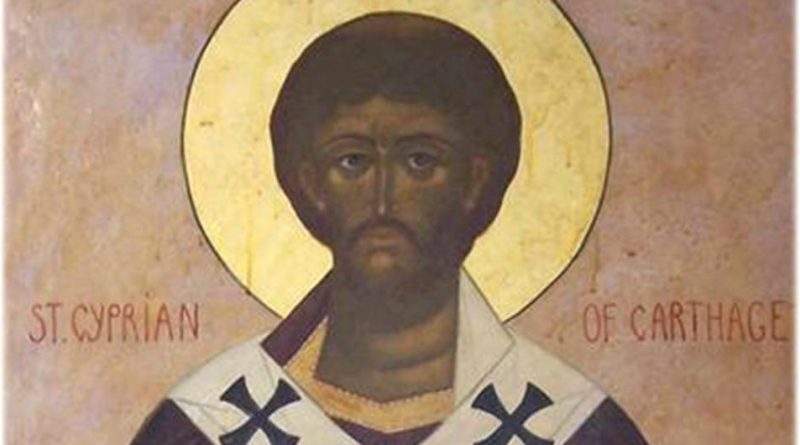 Doctor of the Church, Bishop of Carthage and Martyr

Saint Cyprian was an African of noble birth, the son of a Roman senator; he was a teacher of rhetoric in his youth, but still pagan and frivolous. In his vigorous mid-life he was converted to Christianity through the influence of a priest who was himself a convert to Christianity and was edifying all Carthage by his conversation and his virtues. A long combat followed for Cyprian, who although convinced of the truth of these excellent reasonings and the beauty of this doctrine, still had to overcome the pride of a philosopher and the worldly bent of his life of pleasure. Nonetheless, grace won out and he listened to the interior voice of conscience which constantly pressed him onward: Courage, Cyprian! Whatever the cost, let us go to God. He sold his estates and gave the price to the poor; and it was not long after his baptism that he was ordained a priest, and then consecrated Bishop of Carthage notwithstanding his resistance. The Christian population rejoiced, sure that in him they would have a strong bulwark during persecution.
.
When the persecution of Decius broke out, he was the object of a search by the pagans wanting to disorganize the flock. He left his episcopal city and found a secure retreat, in order to continue to minister to their spiritual needs by letters and the administration of the sacraments. He went on seeing to the burial of the martyrs and the needs of those deprived of their possessions. When a pestilence broke out, he aided in the ministry to the dying. He consulted other ecclesiastical authorities as to whether he should return from his retreat; he was told to remain where he was. He maintained existing religious discipline which required penance of those who, under stress, apostatized by paying money to certain magistrates; these would write certificates saying that they had obeyed the Roman edicts. The prevaricators afterwards strove to escape the penalties and return into communion with the faithful. Saint Cyprian met much opposition by his firmness, but was sustained by Rome.
.
After a few years of peace under the emperor Valerian, he was finally banished and retired to a place about fifty miles from Carthage. There he learned by supernatural revelation that his future martyrdom was to occur the following year. He was discovered in a place near Carthage one day, and the sentence of death by decapitation was pronounced against him. He received it with the words, Thanks be to God. His great desire was to die while preaching the faith of Christ, and he had the consolation of being surrounded at his martyrdom by crowds of his faithful children; there he paid the trembling executioner to encourage him in his task, and, preaching very effectively both by his words and his actions, was beheaded on the 14th of September, 258. In the brief ten years of his ministry, the Church was enriched through the fidelity of the martyrs he sustained, and by the many baptisms of pagans won over to his Christian flock. A considerable number of the spectators who were still pagan wept at his martyrdom. The holy bishop was buried publicly, with great solemnity.
.
Prayer to Venerate Any Saint
..
Saint Catherine of Genoa: Feast Day September 16
.
I desire therefore, first of all, that supplications, prayers, intercessions, and thanksgivings be made for all men: For kings, and for all that are in high station: that we may lead a quiet and a peaceable life in all piety and chastity. For this is good and acceptable in the sight of God our Saviour, Who will have all men to be saved, and to come to the knowledge of the truth.
(1 Timothy 2:1-4)
.
And another angel came, and stood before the altar, having a golden censer; and there was given to him much incense, that he should offer of the prayers of all saints upon the golden altar, which is before the throne of God. And the smoke of the incense of the prayers of the saints ascended up before God from the hand of the angel.
(Rev. 8:3-4)
.
ETERNAL Father, I wish to honor St. (Name), and I give Thee thanks for all the graces Thou has bestowed upon him (her). I ask Thee to please increase grace in my soul through the merits of this saint, and I commit the end of my life to him (her) by this special prayer, so that by virtue of Thy goodness and promise, St. (Name) might be my advocate and provide whatever is needed at that hour. Amen.
.
PROMISE: “When you wish to honor any particular saint and give Me thanks for all the graces I have bestowed on that saint, I increase grace in your soul through the merits of that saint. When you commit the end of your life to any of the saints by special prayers, I appoint those saints to be your advocates and to provide whatever you need at that hour.”-Our Lord to St. Gertrude
.
Blessed Anne Catherine Emmerich revealed in her Visions that saints are particularly powerful on their feast days and should be invoked then.