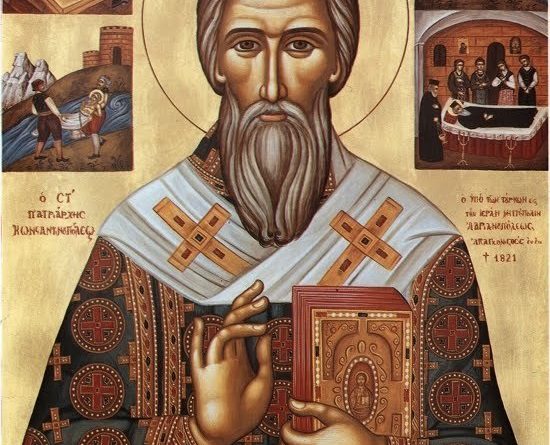 Saint Cyril was born at or near the city of Jerusalem, about the year 315. He was ordained a priest by Saint Maximus, who gave him the important charge of instructing and preparing the candidates for Baptism. This office he held for several years, and today we still have one series of his instructions, given in the year 347 or 348. They are of singular interest as being the earliest record of the systematic teaching of the Church on the Creed and Sacraments, and as having been given in the church built by Constantine on Mount Calvary. They are solid, simple, profound, precise, and saturated with Holy Scripture, and, as a witness and exposition of the Catholic faith, invaluable.
.
On the death of Saint Maximus, Cyril was chosen Bishop of Jerusalem. At the beginning of his episcopate a cross was seen in the sky, reaching from Mount Calvary to Mount Olivet, and so bright that it shone at noonday. Saint Cyril gave an account of it to the emperor, and the faithful regarded it as a presage of victory over the Arian heretics.
.
While Saint Cyril was Bishop of Jerusalem, the apostate emperor Julian resolved to defy the words of Our Lord (Luke 21:6) by rebuilding the ancient temple of Jerusalem. He employed the power and resources of a Roman emperor; the Jews thronged enthusiastically to him and gave munificently. But Cyril was unmoved. The word of God abides, he said; one stone shall not be laid on another. When the attempt was made, a pagan writer tells us that horrible flames came forth from the earth, rendering the place inaccessible to the scorched and frightened workmen. The attempt was made again and again, and then abandoned in despair. Soon after, the emperor perished miserably in a war against the Persians, and the Church had rest.
.
Like the other great bishops of his time, Cyril was persecuted, and was driven twice from his see; but on the death of the Arian emperor Valens, he returned to Jerusalem. He was present at the Second General Council of Constantinople, and died in peace A.D. 386, after a troubled episcopate of thirty-five years.
.
Reflection. As a stout staff, says Saint John Chrysostom, supports the trembling limbs of a feeble old man, so does faith sustain our vacillating mind, lest it be tossed about by sinful hesitation and perplexity.
.
Prayer to Venerate Any Saint
.
Saint Cyril of Jerusalem: Feast Day March 18
.
I desire therefore, first of all, that supplications, prayers, intercessions, and thanksgivings be made for all men: For kings, and for all that are in high station: that we may lead a quiet and a peaceable life in all piety and chastity. For this is good and acceptable in the sight of God our Saviour, Who will have all men to be saved, and to come to the knowledge of the truth.
(1 Timothy 2:1-4)
.
And another angel came, and stood before the altar, having a golden censer; and there was given to him much incense, that he should offer of the prayers of all saints upon the golden altar, which is before the throne of God. And the smoke of the incense of the prayers of the saints ascended up before God from the hand of the angel.
(Rev. 8:3-4)
.
ETERNAL Father, I wish to honor St. (Name), and I give Thee thanks for all the graces Thou has bestowed upon him (her). I ask Thee to please increase grace in my soul through the merits of this saint, and I commit the end of my life to him (her) by this special prayer, so that by virtue of Thy goodness and promise, St. (Name) might be my advocate and provide whatever is needed at that hour. Amen.
.
PROMISE: “When you wish to honor any particular saint and give Me thanks for all the graces I have bestowed on that saint, I increase grace in your soul through the merits of that saint. When you commit the end of your life to any of the saints by special prayers, I appoint those saints to be your advocates and to provide whatever you need at that hour.”-Our Lord to St. Gertrude
.
Blessed Anne Catherine Emmerich revealed in her Visions that saints are particularly powerful on their feast days and should be invoked then
.