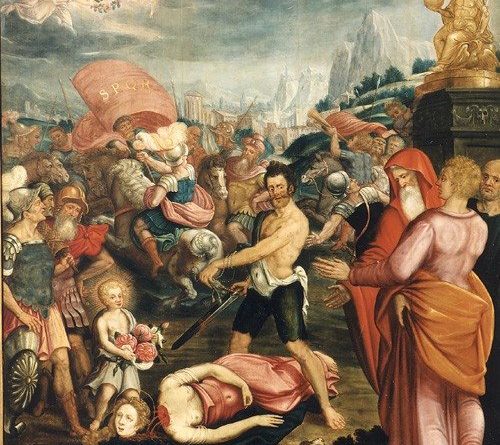 Patronage: brewers, brides, florists, gardeners, midwives, newlyweds, Pescia, Italy
.
Saint Dorothy was a young virgin celebrated already in Caesarea of Cappadocia, where she lived, for her angelic virtue. Her parents are believed to have been martyred before her in the Diocletian persecution; thus, when the Governor Sapricius came to Caesarea and called her to appear before him, he sent this child of martyrs to the eternal home where they were waiting for her.
.
She explained that the God she adored was majestic — above all emperors, who were mortal, and their gods, none of whom created either heaven or earth. She was stretched upon the rack, and offered honors if she would consent to sacrifice, or death if she refused. And they waited. She asked why they delayed to torture her; they were expecting she might cede out of fright. She said to them, Do what you have to do, that I may see the One for whose love I fear neither death nor torments, Jesus Christ. She was asked, Where is this Christ? and she replied: As Almighty He is everywhere, but for weak human reason we say that the Son of God has ascended into heaven, to be seated at the right hand of the Almighty Father. It is He who invites us to the garden of His delights, where at all times the trees are covered with fruits, the lilies are perpetually white, the roses ever in their freshness. If you believe me, you too will search for the true liberty, and will labor to earn entry into the garden of God’s delights. She was then placed in the custody of two women who had fallen away from the faith, in the hope that they might pervert her; but the fire of her own heart rekindled the flame in theirs, and led them back to Christ.
.
When she was set once more on the rack, Sapricius himself was amazed at the heavenly expression on her face, and asked her the cause of her joy. Because, she said, I have brought back two souls to Christ, and because I shall soon be in heaven rejoicing with the Angels. Her joy grew as she was buffeted in the face and her sides were burned with plates of red-hot iron. Blessed art Thou, she cried, when she was sentenced to be beheaded, Blessed art Thou, O Lover of souls, who call me to paradise, and invite me to Thy nuptial chamber!
.
Saint Dorothy suffered in mid-winter, and on the road to her execution a lawyer called Theophilus, who had grown accustomed to calumniating and persecuting the Christians, asked her, in mockery, to send him apples or roses from the garden of her Spouse. The Saint promised to grant his request. Just before she died, a little child stood by her side bearing three apples and three roses. She told him to take them to Theophilus, and to tell him it was the present he sought from the garden of her Spouse. Saint Dorothy had gone to heaven, and Theophilus was still making merry over his challenge to her, when the child entered his room. He recognized that the fruit and flowers were of no earthly growth, and that the child was an Angel in disguise. He was converted to the faith, and then shared in the martyrdom of Saint Dorothy.
.
Reflection. Do you wish to be safe amid the pleasures and happy despite the troubles of this world? Pray for heavenly desires, and say with the Saints, Paradise, paradise!
.
Prayer to Venerate Any Saint
.
Saint Dorothy: Feast Day February 6
.
Rev. 8:3-4 [3] And another angel came, and stood before the altar, having a golden censer; and there was given to him much incense, that he should offer of the prayers of all saints upon the golden altar, which is before the throne of God. [4] And the smoke of the incense of the prayers of the saints ascended up before God from the hand of the angel.
.
ETERNAL Father, I wish to honor St. (Name), and I give You thanks for all the graces You have bestowed upon him (her). I ask You to please increase grace in my soul through the merits of this saint, and I commit the end of my life to him (her) by this special prayer, so that by virtue of Your goodness and promise, St. (Name) might be my advocate and provide whatever is needed at that hour. Amen.
.
PROMISE: “When you wish to honor any particular saint and give Me thanks for all the graces I have bestowed on that saint, I increase grace in your soul through the merits of that saint. When you commit the end of your life to any of the saints by special prayers, I appoint those saints to be your advocates and to provide whatever you need at that hour.”-Our Lord to St. Gertrude
.
Blessed Anne Catherine Emmerich revealed in her Visions that saints are particularly powerful on their feast days and should be invoked then.