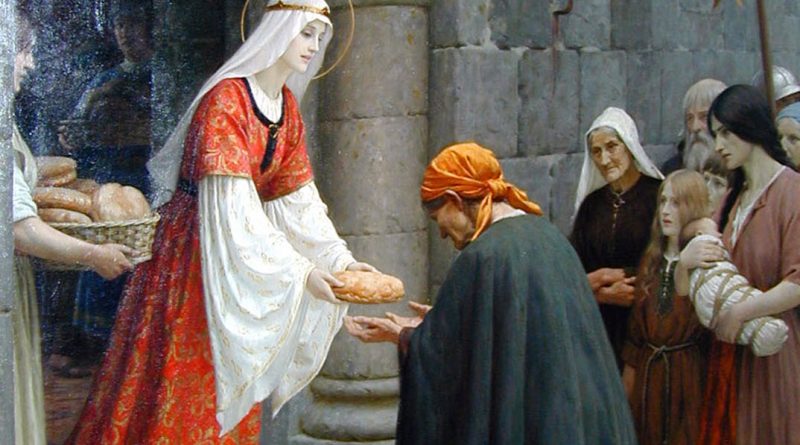 Patronage: Bakers, beggars; brides; charitable societies; charitable
workers; charities; countesses; death of children; diocese of Erfurt,
Germany; exiles; falsely accused people; hoboes; homeless people;
hospitals; in-law problems; archdiocese of Jaro, Philippines lacemakers;
lace workers; nursing homes; nursing services; people in exile; people
ridiculed for their piety; Sisters of Mercy; tertiaries; Teutonic Knights;
toothache; tramps; widows.
.
Elizabeth was the daughter of the just and pious Andrew II, king of Hungary, the niece of Saint Hedwig, and the sister of the virtuous Bela IV, king of Hungary, who became the father of Saint Cunegundes and of Saint Margaret of Hungary, a Dominican nun. Another of her brothers was Coloman, King of Galicia and prince of Russia, who led an angelic life amid the multiple affairs of the world and the troubles of war.
.
She was betrothed in infancy to Louis, Landgrave of Thuringia, and brought up from the age of four in his father’s court. Never could she bear to adopt the ornaments of the court for her own usage, and she took pleasure only in prayer. She would remove her royal crown when she entered the church, saying she was in the presence of the Saviour who wore a crown of thorns. As she grew older, she employed the jewels offered her for the benefit of the poor. Not content with receiving numbers of them daily in her palace, and relieving all in distress, she built several hospitals, where she herself served the sick, bathing them, feeding them, dressing their wounds and ulcers. The relatives of her fiancé tried to prevent the marriage, saying she was fit only for a cloister; but the young prince said he would not accept gold in the quantity of a nearby mountain, if it were offered him to abandon his resolution to marry Elizabeth.
.
Once as she was carrying in the folds of her mantle some provisions for the poor, she met her husband returning from the hunt. Astonished to see her bending under the weight of her burden, he opened the mantle and found in it nothing but beautiful red and white roses, though it was not the season for flowers. He told her to continue on her way, and took one of the marvelous roses, which he conserved all his life. She never ceased to edify him in all of her works. One of her twelve excellent Christian maxims, by which she regulated all her conduct was, Often recall that you are the work of the hands of God and act accordingly, in such a way as to be eternally with Him.
.
When her pious young husband died in Sicily on his way to a Crusade with the Emperor Frederick, she was cruelly driven from her palace by her brother-in-law. Those whom she had aided showed nothing but coldness for her; God was to purify His Saint by harsh tribulations. She was forced to wander through the streets with her little children, a prey to hunger and cold. The bishop of Bamberg, her maternal uncle, finally forced the cruel prince to ask pardon for his ill treatment of her, but she voluntarily renounced the grandeurs of the world, and went to live in a small house she had prepared in the city of Marburgh. There she practiced the greatest austerities. She welcomed all her sufferings, and continued to be the mother of the poor, distributing all of the heritage eventually conceded to her, and converting many by her holy life. She died in 1231, at the age of twenty-four.
.
Reflection: This young and delicate princess made herself the servant and nurse of the poor. Let her example teach us to disregard the opinions of the world and to overcome our natural hesitation, in order to serve Christ in the person of His poor.
.
Prayer to Venerate Any Saint
.
Saint Elizabeth of Hungary: Feast Day November 19
.
Rev. 8:3-4 And another angel came, and stood before the altar, having a golden censer; and there was given to him much incense, that he should offer of the prayers of all saints upon the golden altar, which is before the throne of God. And the smoke of the incense of the prayers of the saints ascended up before God from the hand of the angel.
.
ETERNAL Father, I wish to honor St. (Name), and I give You thanks for all the graces You have bestowed upon him (her). I ask You to please increase grace in my soul through the merits of this saint, and I commit the end of my life to him (her) by this special prayer, so that by virtue of Your goodness and promise, St. (Name) might be my advocate and provide whatever is needed at that hour. Amen.
.
PROMISE: “When you wish to honor any particular saint and give Me thanks for all the graces I have bestowed on that saint, I increase grace in your soul through the merits of that saint. When you commit the end of your life to any of the saints by special prayers, I appoint those saints to be your advocates and to provide whatever you need at that hour.”-Our Lord to St. Gertrude
.
Blessed Anne Catherine Emmerich revealed in her Visions that saints are particularly powerful on their feast days and should be invoked then