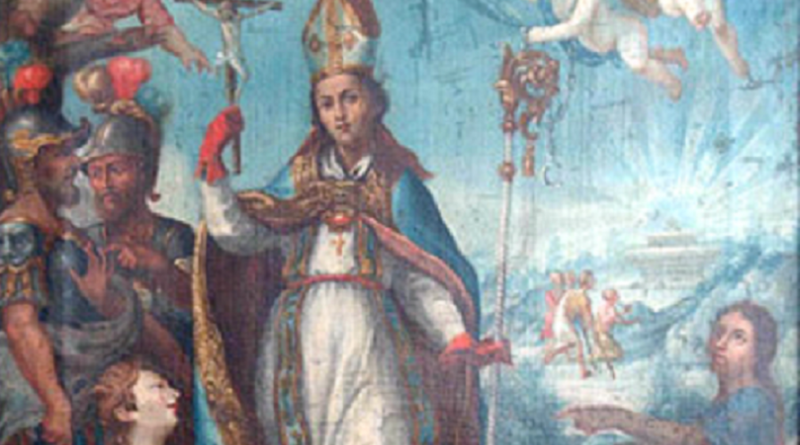 First Bishop of Amiens and Martyr

Patronage: Amiens, France, Lesaka, Spain, Navarre, Spain
.
Saint Firmin, son of a senator, was a native of Pampeluna in Navarre. With his father he was taught the Christian faith by Honestus, a disciple of Saint Saturninus, the bishop of Toulouse, himself the disciple of Saint Peter the Apostle.
.
Saint Firmin, who had been confided by his father to Honestus for his education and had accompanied him on his apostolic journeys, was eventually consecrated bishop by Saint Honoratus, successor to Saint Saturninus at Toulouse. Firmin received the mission to preach the Gospel in the remoter parts of the Occident, or Gaul; thus he preached in the regions of Agen, Angers, and Beauvais. In what is now Clement-Ferrand, after long discussions with two ardent idolaters, he won them over. Error, wherever he passed, seemed to flee before him, as if the infernal powers feared to undertake a combat with this formidable adversary who was sure to defeat them.
.
He had not yet suffered persecution. Desiring martyrdom, he decided to go to a center of paganism in the north, in what is now Normandy, near Lisieux. There he was arrested and imprisoned for a time by the pagans. When delivered, he continued on towards the north, to a region where Saint Denys of Paris had baptized many. He confirmed the Christians in their faith, and went wherever a soul might have need of him. The Roman authorities heard of him and arrested him; the Saint generously confessed Jesus Christ in their presence. Again he was imprisoned, but released when the prefect and his successor both died suddenly. He was obliged, however, to flee secretly.
.
When he arrived at Amiens, he placed his residence there and founded a large church of faithful disciples. Amiens conserves the memory of the day he arrived and preached fearlessly there beside a temple of Jupiter, at a site where now the Basilica of Our Lady stands. He taught aloud the salutary doctrine of Christianity to all who came to listen. Many conversions followed, even among the authorities of the city, including the senator. He continued his preaching in that region for a number of years, while the pagan temples became literally deserted. And then two Roman officials, Longulus and Sebastian, heard of him and came to the city.
.
The pagan priests saw their opportunity, when all the city residents were convoked to appear before the visitors. The two officials explained that the capital penalty was decreed for those who did not obey the imperial edicts, not offering incense to the gods and honoring them. The pagan priests then told them of one who always refused to do so, and Saint Firmin, after an eloquent defense of the religion of Christ, was imprisoned. He finally saw his most ardent desire fulfilled when certain soldiers decided on their own to accomplish the imperial orders, and came with swords to his prison at night, where they decapitated the bishop. He died, filled with joy at their coming. This occurred under the reign of Trajan in the first years of the second century. The holy bishop remains in the greatest honor in the city of Amiens.
.
Prayer to Venerate Any Saint
.
Saint Firmin : Feast Day September 25
.
I desire therefore, first of all, that supplications, prayers, intercessions, and thanksgivings be made for all men: For kings, and for all that are in high station: that we may lead a quiet and a peaceable life in all piety and chastity. For this is good and acceptable in the sight of God our Saviour, Who will have all men to be saved, and to come to the knowledge of the truth.
(1 Timothy 2:1-4)
.
And another angel came, and stood before the altar, having a golden censer; and there was given to him much incense, that he should offer of the prayers of all saints upon the golden altar, which is before the throne of God. And the smoke of the incense of the prayers of the saints ascended up before God from the hand of the angel.
(Rev. 8:3-4)
.
ETERNAL Father, I wish to honor St. (Name), and I give Thee thanks for all the graces Thou has bestowed upon him (her). I ask Thee to please increase grace in my soul through the merits of this saint, and I commit the end of my life to him (her) by this special prayer, so that by virtue of Thy goodness and promise, St. (Name) might be my advocate and provide whatever is needed at that hour. Amen.
.
PROMISE: “When you wish to honor any particular saint and give Me thanks for all the graces I have bestowed on that saint, I increase grace in your soul through the merits of that saint. When you commit the end of your life to any of the saints by special prayers, I appoint those saints to be your advocates and to provide whatever you need at that hour.”-Our Lord to St. Gertrude
.
Blessed Anne Catherine Emmerich revealed in her Visions that saints are particularly powerful on their feast days and should be invoked then.