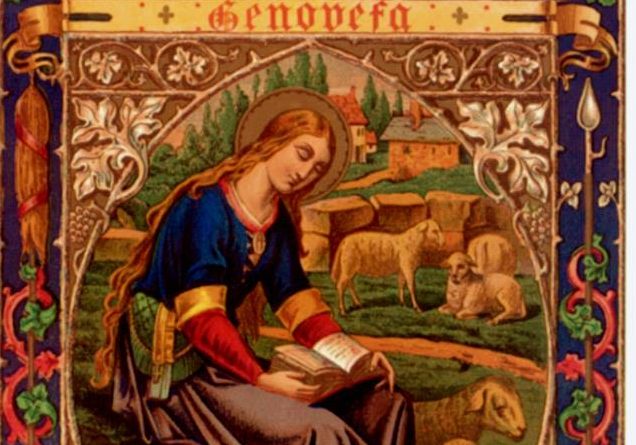 Patronage: against plague, against disasters, against fever, Paris, France, Women’s Army Corps
.
Saint Genevieve was born at Nanterre, near Paris. Saint Germanus, when passing through that village, noticed this little shepherdess and predicted her future sanctity. At seven years of age she made a vow of perpetual chastity. After the death of her parents, Paris became her abode, but she often traveled on works of mercy in which she was assisted by the gifts of prophecy and miracles.
.
At one time she was cruelly persecuted. Her enemies, jealous of her power, called her a hypocrite and tried to drown her, but when Saint Germanus sent her some blessed bread as a token of esteem, the outcry ceased. Ever afterwards she was honored as a Saint.
.
During the siege of Paris by Childeric, king of the Franks, Genevieve went out with a few followers and procured grain for the starving citizens. Childeric, though a pagan, respected her, and at her request spared the lives of many prisoners. When Attila and his Huns were approaching the city for another incursion, the inhabitants, instead of taking flight, asked her aid; and listening to her exhortations they undertook prayer and penance, thus averting the impending scourge, as she had foretold would be possible. Clovis, when converted from paganism by his holy wife, Saint Clotilda, made Genevieve his constant adviser, and, in spite of his violent character, became a generous and Christian king.
.
Saint Genevieve died in 512, at the age of eighty-nine. When in 1129 a pestilence broke out at Paris, in a short time it swept off fourteen thousand persons, and, in spite of all human efforts, daily added to its victims. At length, on November 26th, the reliquary of Saint Genevieve was carried in solemn procession through the city. That same day only three persons died; the rest recovered, and no others were taken ill. This was but the first of a series of miraculous favors which the city of Paris has obtained through the relics of its patron Saint.
.
Prayer to Venerate Any Saint
.
Saint Genevieve: Feast Day January 3
.
Rev. 8:3-4 [3] And another angel came, and stood before the altar, having a golden censer; and there was given to him much incense, that he should offer of the prayers of all saints upon the golden altar, which is before the throne of God. [4] And the smoke of the incense of the prayers of the saints ascended up before God from the hand of the angel.
.
ETERNAL Father, I wish to honor St. (Name), and I give You thanks for all the graces You have bestowed upon him (her). I ask You to please increase grace in my soul through the merits of this saint, and I commit the end of my life to him (her) by this special prayer, so that by virtue of Your goodness and promise, St. (Name) might be my advocate and provide whatever is needed at that hour. Amen.
.
PROMISE: “When you wish to honor any particular saint and give Me thanks for all the graces I have bestowed on that saint, I increase grace in your soul through the merits of that saint. When you commit the end of your life to any of the saints by special prayers, I appoint those saints to be your advocates and to provide whatever you need at that hour.”-Our Lord to St. Gertrude
.
Blessed Anne Catherine Emmerich revealed in her Visions that saints are particularly powerful on their feast days and should be invoked then.