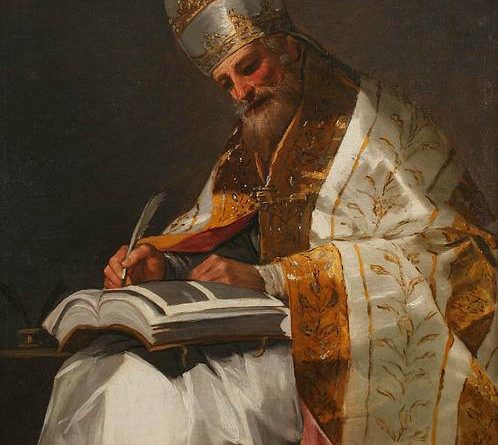 Patronage: against gout, against plague, choir boys, educators, England, Philippines, diocese of masons, Montone, Italy, musicians, Order of Knights of Saint Gregory, papacy, Popes, schoolchildren, singers, stone masons, stonecutters, students, teachers, West Indies
.
Saint Gregory the Great was a Roman of noble Christian birth, the son of a canonized Saint, his mother, Saint Silva; and he was the nephew of two others, Saints Tarsilla and Emiliana. At thirty years of age he became the Prefect of Rome, the highest civil dignity of that city. On his father’s death in 574 he gave his great wealth to the poor, turned his house on the Caelian Hill into the monastery which now bears his name, and for several years lived as a perfect monk. His famous exposition of the Book of Job dates from his monastic years.
.
The Pope drew him from his seclusion in 578 to make him one of the seven deacons of Rome; and for seven years he rendered great service to the Church as what we now call Papal Nuncio to the imperial court at Constantinople. He had been sent there to obtain assistance against the Lombard invasions, but returned with a conviction which was a foundation of his later activity, that no help could any longer be obtained from that court. When he was recalled to Rome he became Abbot of his Monastery, then known by the name of Saint Andrew’s.
.
While still a monk the Saint was struck by the sight of some fair-complexioned boys who were exposed for sale in Rome, and heard with sorrow that they were pagans. And of what race are they? he asked. They are Angles. Worthy indeed to be Angels of God, said he. He at once obtained permission from the Pope to set out to evangelize the English. With several companion monks he had already made a three-days’ journey when the Pope, ceding to the regrets of the Roman people, sent out messengers to overtake and recall them. Still the Angles were not forgotten, and one of the Saint’s first cares as Pope was to send, from his own monastery, Saint Augustine and forty more monks to England.
.
On the death of Pope Pelagius II, Saint Gregory was compelled to take upon himself the government of the Church, and for fourteen years his pontificate was a perfect model of ecclesiastical rule. He healed schisms, revived discipline, and saved Italy by converting the wild Arian Lombards who were laying it waste; he aided in the conversion of the Spanish and French Goths, who also were Arians, and kindled anew in Britain the light of the Faith, which the Anglo-Saxons had extinguished in blood. He set in order the Church’s prayers and chant, guided and consoled her pastors with innumerable letters, and preached incessantly, most effectively by his own example. Many of his sermons are still extant and are famous for their constant use of Holy Scripture. His writings are numerous and include fourteen books of his letters.
.
Saint Gregory I died in 604, worn out by austerities and toils. The Church includes him among her four great Latin doctors, and reveres him as Saint Gregory the Great.
.
Reflection. The champions of faith prove the truth of their teaching no less by the holiness of their lives than by the force of their arguments. Never forget that to bring others to God you must first see to your own soul.
.
Prayer to Venerate Any Saint
.
Saint Gregory the Great: Feast Day March 12
.
Rev. 8:3-4 [3] And another angel came, and stood before the altar, having a golden censer; and there was given to him much incense, that he should offer of the prayers of all saints upon the golden altar, which is before the throne of God. [4] And the smoke of the incense of the prayers of the saints ascended up before God from the hand of the angel.
.
ETERNAL Father, I wish to honor St. (Name), and I give You thanks for all the graces You have bestowed upon him (her). I ask You to please increase grace in my soul through the merits of this saint, and I commit the end of my life to him (her) by this special prayer, so that by virtue of Your goodness and promise, St. (Name) might be my advocate and provide whatever is needed at that hour. Amen.
.
PROMISE: “When you wish to honor any particular saint and give Me thanks for all the graces I have bestowed on that saint, I increase grace in your soul through the merits of that saint. When you commit the end of your life to any of the saints by special prayers, I appoint those saints to be your advocates and to provide whatever you need at that hour.”-Our Lord to St. Gertrude
.
Blessed Anne Catherine Emmerich revealed in her Visions that saints are particularly powerful on their feast days and should be invoked then.