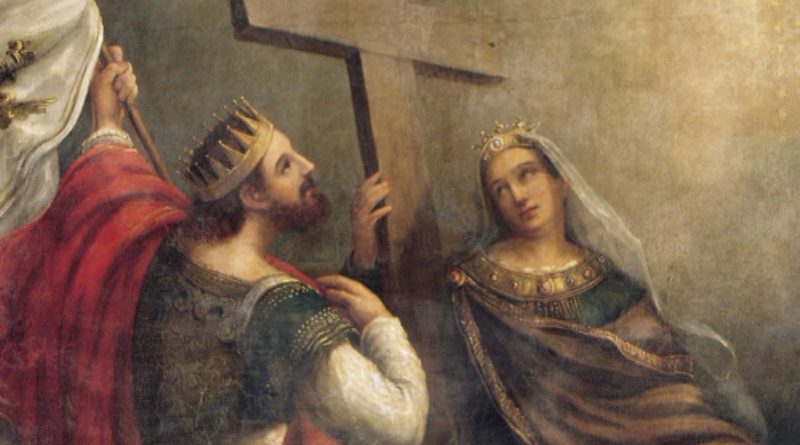 Patronage: archaeologists, converts, difficult marriages, divorced people, empresses, Saint Helena island
It was the pious boast of the city of Colchester, England, for many ages, that Saint Helen was born within its walls; and though this honor has been disputed, since others say she was born in York, it is certain that she was a British princess. She married a Roman General, Constantius Chlorus, and became the mother of Constantine the Great. She embraced Christianity late in life; but her incomparable faith and piety greatly influenced her son Constantine, the first Christian emperor, and served to kindle a holy zeal in the hearts of the Roman people. Forgetful of her high dignity, she delighted to assist at the Divine Office amid the poor; and by her almsdeeds showed herself a mother to the indigent and distressed.
In her eightieth year she made a famous pilgrimage to Jerusalem, with the ardent desire of discovering the cross on which our Blessed Redeemer had suffered. After many labors, three crosses were found on Mount Calvary, together with the names and the inscription recorded by the Evangelists. The miraculous discovery and verification of the true Cross is still celebrated by the Church on the 3rd of May. The pious empress, transported with joy, built a beautiful Basilica on Mount Calvary to receive the precious relic, sending portions of it also to Rome and Constantinople, where they were solemnly exposed to the adoration of the faithful. She built two other famous churches in Palestine to honor the sacred sites of Our Lord’s life, one at the site of His Ascension, and the other, known as the Basilica of the Nativity, in Bethlehem, which she and her son richly adorned.
Saint Helen’s influence on her son Constantine is recognized by all historians. He always honored her in every way. In the year 312, when Constantine found himself attacked by Maxentius with vastly superior forces, and the very existence of his western empire was threatened, he remembered the crucified Christian God whom his mother Helen worshiped. Kneeling down, he prayed God to reveal Himself as the supreme God, by giving him an otherwise impossible victory. Suddenly at noonday, a cross of fire was seen by his army in the calm and cloudless sky, and beneath it the words, In hoc signo vinces — In this sign thou shalt conquer. By divine command, Constantine made a standard like the cross he had seen, to be borne at the head of his troops. This is the famous banner known as the Roman Labarum. Under this Christian ensign they marched against the enemy and obtained a complete victory.
When past the age of 80, Saint Helen returned from Jerusalem to Rome, dying there in 328.
Reflection: Saint Helen thought it the glory of her life to find the Cross of Christ, and to raise a temple in His honor. Yet many Christians in these days are ashamed to make this life-giving sign publicly, and to confess themselves followers of the Crucified!
Prayer to Honor Any Saint
Saint Hyacinth: Feast Day August 18
I desire therefore, first of all, that supplications, prayers, intercessions, and thanksgivings be made for all men: For kings, and for all that are in high station: that we may lead a quiet and a peaceable life in all piety and chastity. For this is good and acceptable in the sight of God our Saviour, Who will have all men to be saved, and to come to the knowledge of the truth. (1 Timothy 2:1-4)
And another angel came, and stood before the altar, having a golden censer; and there was given to him much incense, that he should offer of the prayers of all saints upon the golden altar, which is before the throne of God. And the smoke of the incense of the prayers of the saints ascended up before God from the hand of the angel. (Rev. 8:3-4)
ETERNAL Father, I wish to honor St. (Name), and I give You thanks for all the graces You have bestowed upon him (her). I ask You to please increase grace in my soul through the merits of this saint, and I commit the end of my life to him (her) by this special prayer, so that by virtue of Your goodness and promise, St. (Name) might be my advocate and provide whatever is needed at that hour. Amen.
PROMISE: “When you wish to honor any particular saint and give Me thanks for all the graces I have bestowed on that saint, I increase grace in your soul through the merits of that saint. When you commit the end of your life to any of the saints by special prayers, I appoint those saints to be your advocates and to provide whatever you need at that hour.”-Our Lord to St. Gertrude
Blessed Anne Catherine Emmerich revealed in her Visions that saints are particularly powerful on their feast days and should be invoked then