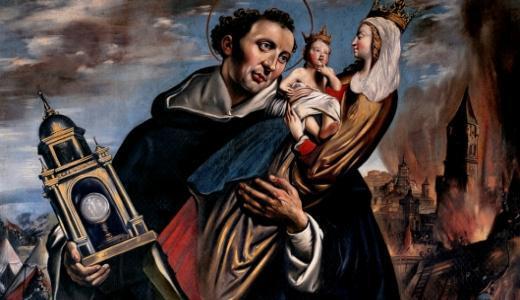 Patronage: Lithuania, University of Santo Tomas-College of Tourism and Hospitality Management, invoked by those in danger of drowning; Basilica of St. Hyacinth
Saint Hyacinth, named the glorious Apostle of the North, was born of noble parents in Poland, about the year 1185. In 1218, as a Canon of Cracow he accompanied the bishop of that region to Rome. There he met Saint Dominic and soon afterward was one of the first to receive the habit of the Friar Preachers, in a group clothed by the patriarch himself. He became a living copy of his dear master. The church was his only chamber, and the ground his only bed. So wonderful was his progress in virtue that within a year Dominic sent him with a small group to preach and plant the Order in Poland, where he founded two houses.
His apostolic journeys extended over numerous and vast regions. Austria, Bohemia, Livonia, the shores of the Black Sea, Tartary, Northern China in the east, Sweden, Norway and Denmark to the west, were evangelized by him, and he is said to have visited Scotland. Everywhere he traveled unarmed, without a horse, with no money, no interpreters, no furs in the severe winters, and often without a guide, abandoning to Divine Providence his mission in its entirety. Everywhere multitudes were converted, churches and convents were built; one hundred and twenty thousand pagans and infidels were baptized by his hands. He worked many miracles; at Cracow he raised a dead youth to life. He had inherited from Saint Dominic a perfect filial confidence in the Mother of God; to Her he ascribed his success, and to Her aid he looked for his own salvation. It was at the request of this indefatigable missionary that Saint Thomas Aquinas wrote his famous philosophical Summa contra Gentiles, proving the reasonableness of the Faith on behalf of those unfamiliar with doctrine.
While Saint Hyacinth was at Kiev the Tartars sacked the town, but it was only as he finished Mass that the Saint heard of the danger. Without waiting to unvest, he took the ciborium in his hands, and was leaving the church. Then occurred the most famous of his countless prodigies. As he passed by a statue of Mary a voice said: Hyacinth, My son, why do you leave Me behind? Take Me with you… The statue was of heavy alabaster, but when Hyacinth took it in his arms it was light as a reed. With the Blessed Sacrament and the statue he walked to the Dnieper river, and crossed dry-shod over the surface of the waters to the far bank.
On the eve of the Assumption, 1257, he was advised of his coming death. In spite of an unrelenting fever, he celebrated Mass on the feast day and communicated as a dying man. He was anointed at the foot of altar, and died on the great Feast of Our Lady.
Reflection: Saint Hyacinth teaches us to spare no effort in the service of God, but to rely for success not on our industry but on the assistance and prayer of His Immaculate Mother.
Prayer to Honor Any Saint
Saint Hyacinth: Feast Day August 17
I desire therefore, first of all, that supplications, prayers, intercessions, and thanksgivings be made for all men: For kings, and for all that are in high station: that we may lead a quiet and a peaceable life in all piety and chastity. For this is good and acceptable in the sight of God our Saviour, Who will have all men to be saved, and to come to the knowledge of the truth. (1 Timothy 2:1-4)
And another angel came, and stood before the altar, having a golden censer; and there was given to him much incense, that he should offer of the prayers of all saints upon the golden altar, which is before the throne of God. And the smoke of the incense of the prayers of the saints ascended up before God from the hand of the angel. (Rev. 8:3-4)
ETERNAL Father, I wish to honor St. (Name), and I give You thanks for all the graces You have bestowed upon him (her). I ask You to please increase grace in my soul through the merits of this saint, and I commit the end of my life to him (her) by this special prayer, so that by virtue of Your goodness and promise, St. (Name) might be my advocate and provide whatever is needed at that hour. Amen.
PROMISE: “When you wish to honor any particular saint and give Me thanks for all the graces I have bestowed on that saint, I increase grace in your soul through the merits of that saint. When you commit the end of your life to any of the saints by special prayers, I appoint those saints to be your advocates and to provide whatever you need at that hour.”-Our Lord to St. Gertrude
Blessed Anne Catherine Emmerich revealed in her Visions that saints are particularly powerful on their feast days and should be invoked then