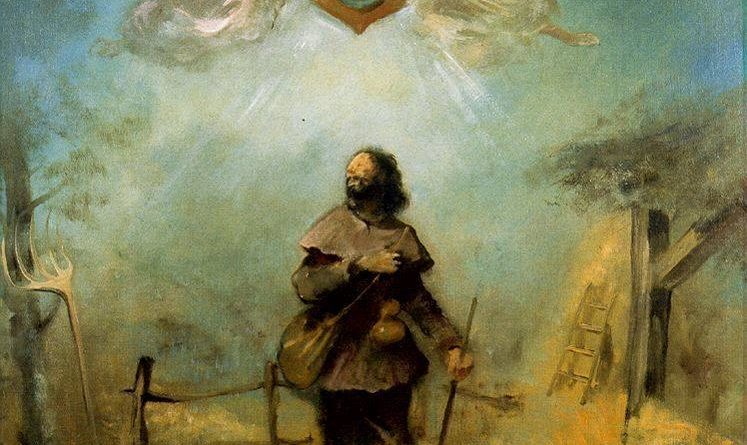 Patronage: Madrid, agricultures; farmers; day labourers; San Isidro, Cuz Cuz, Carampa and Lima
.
Saint Isidore the Farmer, a perennially popular Saint in Spain, was born near Madrid of very poor but very Christian parents, who early inspired in him love for God and horror of sin. His education was accomplished entirely by the Holy Spirit who taught him, without books, the science of salvation.
.
He married a wife rich in virtue, Maria Torribia, and God blessed them with a son whom they brought up in the sentiments of their own piety. The child fell into a well, which is still shown in Madrid, and drowned; but when his parents prayed he might be returned to them, the water rose to ground level and brought up the child full of life and health. They promised then to separate, apparently out of gratitude to God, and to live in perpetual continence.
.
Saint Isidore’s wife became a hermit like himself; Maria, too, performed miracles and merited after her death the name of Santa Maria de la Cabeza, meaning Head, because her head, conserved in a reliquary and carried in procession, has often brought down rain from heaven for the afflicted countryside. Her remains are honored by all of Spain by pilgrimages and processions at Torrelaguna, where they were transferred in 1615.
.
Saint Isidore himself was a day-laborer on a farm near Madrid, but every day found him at Mass in one of the churches of the city before he set out for his daily task. His employer desired to verify whether he was wasting time during his work, and one day saw two mysterious personages helping the holy worker to guide his plow; Isidore himself told him they were Angels. Afterwards the wealthy owner became still more convinced that piety was useful in all occupations. For not only did his worker bring back to life one of his horses, which he very much needed; when his daughter, too, died, she was resurrected by the Saint. A fountain of water which the Saint caused to surge up by striking the ground still exists.
.
Saint Isidore, though poor, shared all he had with the poor; and one day, when no provisions were left, his cupboard was found well furnished when still another beggar arrived.
.
Saint Isidore died some time after his wife; and forty years later his remains, which had been in extremely wet ground, were found incorrupt. They were taken into the Church of Saint Andrew and re-interred there; miracles have been countless, and celestial music has often been heard at his tomb. He has protected the city of Seville, making himself visible occasionally; and the kings of Spain themselves urged his canonization, which was carried out in 1622 by Pope Gregory XV.
.
Prayer to Venerate Any Saint
.
Saint Isidore of Madrid: Feast Day May 10
.
I desire therefore, first of all, that supplications, prayers, intercessions, and thanksgivings be made for all men: For kings, and for all that are in high station: that we may lead a quiet and a peaceable life in all piety and chastity. For this is good and acceptable in the sight of God our Saviour, Who will have all men to be saved, and to come to the knowledge of the truth. (1 Timothy 2:1-4)
.
And another angel came, and stood before the altar, having a golden censer; and there was given to him much incense, that he should offer of the prayers of all saints upon the golden altar, which is before the throne of God. And the smoke of the incense of the prayers of the saints ascended up before God from the hand of the angel. (Rev. 8:3-4)
.
ETERNAL Father, I wish to honor St. (Name), and I give Thee thanks for all the graces Thou have bestowed upon him (her). I ask Thee to please increase grace in my soul through the merits of this saint, and I commit the end of my life to him (her) by this special prayer, so that by virtue of Thine goodness and promise, St. (Name) might be my advocate and provide whatever is needed at that hour. Amen.
.
PROMISE: “When you wish to honor any particular saint and give Me thanks for all the graces I have bestowed on that saint, I increase grace in your soul through the merits of that saint. When you commit the end of your life to any of the saints by special prayers, I appoint those saints to be your advocates and to provide whatever you need at that hour.”-Our Lord to St. Gertrude
.
Blessed Anne Catherine Emmerich revealed in her Visions that saints are particularly powerful on their feast days and should be invoked then.