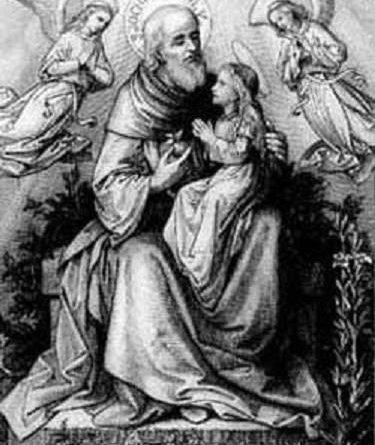 Father of the Most Blessed Virgin Mary

Patronage: Adjuntas, Puerto Rico, fathers, grandparents, Fasnia (Tenerife)
Joachim, of the tribe of Juda and the family of David, was a shepherd of Nazareth. Stolanus, father of Saint Anne, gave him his pious daughter in marriage. The two spouses lived in the fear of the Lord and the practice of good works. They divided all their wealth into three parts: the first was regularly given to the temple, for its support and that of the ministers of religion; they gave the second part to the poor, while the last and least excellent served for the needs of the family. Nonetheless, happiness had not come to this home — the spouse of Joachim was sterile.
For twenty years already they had prayed to God to deliver them from this opprobrium. The holy couple invariably went, according to custom at the Feast of Tabernacles, to the Holy City. There the high priest was immolating the victims when Joachim presented himself in his turn, bearing a lamb; Anne followed him. The high priest had only words of contempt and reproach for them, and in the presence of the people he rejected their offering.
Joachim did not have the heart to return to Nazareth; his grief prompted him to seek solitude and prayer. Anne returned alone to their residence, and he retired to a region near Jerusalem, where shepherds were pasturing their sheep. The silent calm of pastoral life, brought some relief to the wound of his heart. Who has not known how solitude brings one closer to God?
One day when he was alone in the fields, the Angel Gabriel came and stood before him. Joachim prostrated himself, trembling with fear. Do not fear, said the heavenly messenger. I am the Angel of the Lord, and it is God Himself who sends me. He has heard your prayers; your alms have come before His presence. Anne, your spouse, will bear a daughter whose happiness will be above that of other women; She will be blessed, and named the Mother of eternal blessing. You will name the Child Mary and consecrate Her to God when the time comes. The Holy Spirit, from the time She is in the womb of Her mother, will dwell in Her soul, and He will accomplish in Her great things. With those words, the Angel disappeared.
The Archangel’s announcement and the Lord’s promise were fulfilled. Joachim in his turn was faithful to the commands of the Lord. His daughter received the name of Mary, and when She was three years old, he and Saint Anne entrusted Her to the pious women who in the temple of Jerusalem brought up young girls consecrated to the Lord. Mary had lived there under the gaze of God for eight years, when Joachim died, laden with merits and virtues. Anne, his spouse, had him buried in the Valley of Josaphat, not far from the Garden of Gethsemane, and one year later rejoined him there.
Prayer to Honor Any Saint
Saint Joachim: Feast Day August 16
I desire therefore, first of all, that supplications, prayers, intercessions, and thanksgivings be made for all men: For kings, and for all that are in high station: that we may lead a quiet and a peaceable life in all piety and chastity. For this is good and acceptable in the sight of God our Saviour, Who will have all men to be saved, and to come to the knowledge of the truth. (1 Timothy 2:1-4)
And another angel came, and stood before the altar, having a golden censer; and there was given to him much incense, that he should offer of the prayers of all saints upon the golden altar, which is before the throne of God. And the smoke of the incense of the prayers of the saints ascended up before God from the hand of the angel. (Rev. 8:3-4)
ETERNAL Father, I wish to honor St. (Name), and I give You thanks for all the graces You have bestowed upon him (her). I ask You to please increase grace in my soul through the merits of this saint, and I commit the end of my life to him (her) by this special prayer, so that by virtue of Your goodness and promise, St. (Name) might be my advocate and provide whatever is needed at that hour. Amen.
PROMISE: “When you wish to honor any particular saint and give Me thanks for all the graces I have bestowed on that saint, I increase grace in your soul through the merits of that saint. When you commit the end of your life to any of the saints by special prayers, I appoint those saints to be your advocates and to provide whatever you need at that hour.”-Our Lord to St. Gertrude
Blessed Anne Catherine Emmerich revealed in her Visions that saints are particularly powerful on their feast days and should be invoked then