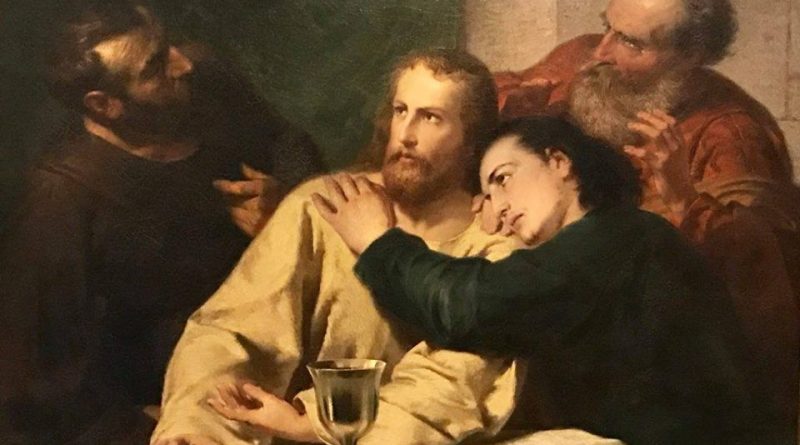 Patronage: against burns, against epilepsy against foot problems, against hailstorms, against poisoning, burn victims, art dealers, authors, basketmaker, bookbinders, booksellers, publishers, butchers, engravers, friendships, government officials, harvests, notaries, painters, printer, saddle makers, scholars, sculptors, theologians, writers
.
Saint John, brother of Saint James the Greater, the Apostle of Spain, is the beloved disciple. He was privileged, with his brother and Saint Peter, to behold the Saviour raise up a dead child to life, then saw Him transfigured on the mountaintop; he alone reposed his head on His breast at the Last Supper. After the crucifixion, it is he who, with Saint Peter, hastened to the empty tomb on the morning of the Resurrection. Standing beside Mary at the Cross, he had heard his Master confide that Blessed Mother to him to be henceforth his Mother also. He took his precious treasure for refuge to Ephesus when the persecution of the Jerusalem Christians became too intense; and from there he went out to evangelize Asia Minor, of which he became the first Archbishop. He was later exiled to the Island of Patmos, where he wrote the Apocalypse, but afterward returned to Ephesus.
.
Compared with an eagle by his flights of elevated contemplation, Saint John is the supreme Doctor of the Divinity of Jesus of Nazareth. Endowed with an astounding memory, he was able even in his later years, to reproduce the discourses of Christ in such a way as to make the reader experience their power and impact on their audiences as if present to hear them. He is the author of five books of the New Testament, his Gospel, three Epistles, and the last canonical prophecy, the Apocalypse or Revelation of Saint John — all of which were composed after the ruin of Jerusalem in 70 A.D.
.
In his extreme old age he continued to visit the churches of Asia, and Saint Jerome relates that when age and weakness grew upon him so that he was no longer able to preach to the people, he would be carried to the assembly of the faithful by his disciples, with great difficulty; and every time said to his flock only these words: My dear children, love one another.
.
Saint John died in peace at Ephesus in the third year of Trajan, that is, the hundredth of the Christian era, or the sixty-sixth from the crucifixion of Christ, Saint John then being about ninety-four years old, according to Saint Epiphanus.
.
Reflection: Saint John is a living proof of Our Lord’s beatitude: Blessed are the pure of heart, for they shall see God. (Matthew 5:8)
.
Prayer to Venerate Any Saint
.
Saint John the Evangelist: Feast Day December 27
.
Rev. 8:3-4 [3] And another angel came, and stood before the altar, having a golden censer; and there was given to him much incense, that he should offer of the prayers of all saints upon the golden altar, which is before the throne of God. [4] And the smoke of the incense of the prayers of the saints ascended up before God from the hand of the angel.
.
ETERNAL Father, I wish to honor St. (Name), and I give You thanks for all the graces You have bestowed upon him (her). I ask You to please increase grace in my soul through the merits of this saint, and I commit the end of my life to him (her) by this special prayer, so that by virtue of Your goodness and promise, St. (Name) might be my advocate and provide whatever is needed at that hour. Amen.
.
PROMISE: “When you wish to honor any particular saint and give Me thanks for all the graces I have bestowed on that saint, I increase grace in your soul through the merits of that saint. When you commit the end of your life to any of the saints by special prayers, I appoint those saints to be your advocates and to provide whatever you need at that hour.”-Our Lord to St. Gertrude
.
Blessed Anne Catherine Emmerich revealed in her Visions that saints are particularly powerful on their feast days and should be invoked then