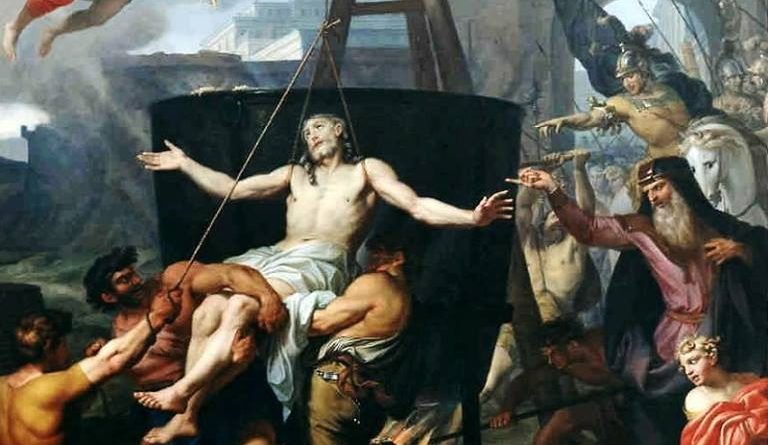 Patronage: against burns, against epilepsy, against foot problems, against hailstorms, against poisoning, burn victims, art dealers, authors, basket makers, bookbinders, booksellers, publishers, butchers, compositors, editors, engravers, friendships, glaziers, government officials, harvests, lithographers, notaries, painters, papermakers, printers, saddle makers, scholars, sculptors, tanners, theologians, typesetters, vintners, writers
.
In the year 95, Saint John the Evangelist, the only surviving Apostle, who was governing all the churches of Asia Minor (present-day Turkey), was apprehended at Ephesus and sent in chains to Rome. The Emperor Domitian did not relent at the sight of the venerable old man, but condemned him to be cast into a cauldron of boiling oil. The martyr doubtless heard, with great joy, this barbarous sentence; the most cruel torments seemed to him light and agreeable because he hoped they would unite him forever to his divine Master and Saviour. But God accepted his will and crowned his desire; He conferred on him the honor and merit of martyrdom while suspending the operation of the fire, just as He had formerly preserved the three children from injury in the Babylonian furnace. The seething oil was changed for him into an invigorating bath, and the Saint came out more refreshed than when he had entered the cauldron.
.
The glorious triumph of Saint John happened just beyond the gate of Rome called the Latina. A church which ever since has borne this title was consecrated there, in memory of the miracle. Domitian saw this miracle without deriving the least advantage from it, remaining hardened in his iniquity. Nonetheless, he contented himself afterwards with banishing the holy Apostle to the little island of Patmos. Saint John returned to Ephesus during the mild reign of Nerva (96-98), who during his short imperial government lasting one year and four months, merely labored to restore the faded luster of the Roman Empire.
.
Reflection. Saint John suffered above the other Saints a martyrdom of love, being a martyr and more than a martyr, at the foot of the cross of his divine Master. All Our Lord’s sufferings were by love and compassion imprinted in his soul, and thus shared by him. O singular happiness, to have stood under the cross of Christ! O extraordinary privilege, to have suffered martyrdom beside Jesus, and been eye-witness of all He did or endured! If nature revolts within us against suffering, let us call to mind those words of the divine Master to Saint Peter: Now thou knowest not why, but thou shalt know hereafter. (John 13:7)
.
Prayer to Venerate Any Saint
.
Saint John: Feast Day May 6
.
I desire therefore, first of all, that supplications, prayers, intercessions, and thanksgivings be made for all men: For kings, and for all that are in high station: that we may lead a quiet and a peaceable life in all piety and chastity. For this is good and acceptable in the sight of God our Saviour, Who will have all men to be saved, and to come to the knowledge of the truth. (1 Timothy 2:1-4)
.
And another angel came, and stood before the altar, having a golden censer; and there was given to him much incense, that he should offer of the prayers of all saints upon the golden altar, which is before the throne of God. And the smoke of the incense of the prayers of the saints ascended up before God from the hand of the angel. (Rev. 8:3-4)
.
ETERNAL Father, I wish to honor St. (Name), and I give You thanks for all the graces You have bestowed upon him (her). I ask You to please increase grace in my soul through the merits of this saint, and I commit the end of my life to him (her) by this special prayer, so that by virtue of Your goodness and promise, St. (Name) might be my advocate and provide whatever is needed at that hour. Amen.
.
PROMISE: “When you wish to honor any particular saint and give Me thanks for all the graces I have bestowed on that saint, I increase grace in your soul through the merits of that saint. When you commit the end of your life to any of the saints by special prayers, I appoint those saints to be your advocates and to provide whatever you need at that hour.”-Our Lord to St. Gertrude
.
Blessed Anne Catherine Emmerich revealed in her Visions that saints are particularly powerful on their feast days and should be invoked then.